Hosts India get set to face visitors England on the fifth and final day of the fiorst of the five-Test series at the Saurashtra Cricket Association Stadium in Rajkot on Sunday, as the live cricket streaming of the match is available on Hotstar, while the live telecast of the match is available on Star Sports 1 and Star Sports HD1, along with the Hindi commentary on Star Sports 3, and Star Sports HD3. England currently lead in the second innings by 163 runs, and would be interesting to see how things pan out on the final day, and if India can come up with something special with the ball, to get rid of England early, and possible chase down a low total. Live Cricket Scorecard: India vs England 1st Test at Rajkot

Years of toil and all the knocking in the backyard paid dividends for father Ismail as Haseeb Hameed became the third youngest batsman from England to score a Test fifty. The advantage shifted to England at the end of Day Four s play as they find themselves comfortably placed at 114 for no loss. Debutant Hameed stroked to his maiden fifty on his Test debut as England now lead by 163. The Hameed family who originally migrated from Gujarat were at Rajkot witnessing this feat. The fact that the maiden fifty came in Gujarat soil was surreal. Hamid and English skipper Alastair Cook remained unbeaten on 62 and 46 respectively.

A bit of English comfort was provided by Indian captain Virat Kohli as well. He brought in leg-spinner Amit Mishra after 26 overs. The move was baffling considering a right-hander was in the crease and earlier in the day, England s leg-spinner Adil Rashid got purchase off the surface to claim a four-for. Mishra got something out from the surface, especially the last ball that he bowled in the day pitched outside leg and took a serious turn, missing Hameed s outside edge.

India also lost a review when they unsuccessfully challenged a decision as Ashwin felt he had Hameed s wicket. The ball turned in sharply and Hameed did not offer a shot as he padded the ball. It would have still gone on to miss the off-stump. It came as a surprise that India went ahead with review. Perhaps this bit shows their desperation part.

The Rajkot pitch did not crumble as much as it was expected to. There was turn and bounce. There was little movement off the surface and no apparent reverse swing. The bowlers continued to be the victim as another day went in the name of batsmen.

India and England are in or a fitting finale on Day Five of the first Test with England having a strong lead but still lots to be answered in the Test. India started Day Four at 319 for 4, still trailing by 218 runs, and eventually got bowled out for 488. This gave a stiff lead to England of 49 runs but they ended the day on a high, reeling at 114 for no loss. After toiling hard for years to find a partner for Alastair Cook, Haseeb Hameed seems to have sort out England’s search and opening order miseries with a fine batting display and unbeaten fifty at stumps.This has not only swung the game in England’s favour and they will be looking to add quick runs to add pressure in India’s camp. 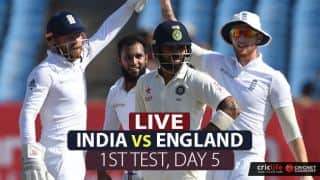