The live cricket streaming of India vs England, 2nd Test at Vishakhapatnam, Day 3 is available on the go on Hotstar.

Hosts India face off against visitors England on Day 3 of the second of the five-Test series at the Dr. YS Rajasekhara Reddy ACA-VDCA Cricket Stadium in Visakhapatnam on Saturday, as the live cricket streaming of the match is available on the go on Hotstar, while the live telecast of the match is available on Star Sports and Star Sports HD1, along with the Hindi commentary on Star Sports and Star Sports HD3. England are currently trailing India by 352 runs in the first innings, with five wickets down, and could be in deep trouble if they lose quick wickets on Day 3, as they could be enforced a follow on as well. LIVE CRICKET SCORECARD: India vs England 2nd Test at Visakhapatnam

Indian off-spinner Ravichandran Ashwin claimed a couple of crucial wickets, as visitors England continued to trail hosts India by 352 runs, at stumps, on Day 2 of the second of the five-Test series, at the Dr. YS Rajasekhara Reddy ACA-VDCA Cricket Stadium in Visakhapatnam on Friday. In form top order batsman Joe Root was the highest scorer for England so far, scoring 53 runs, while Jonny Bairstow and Ben Stokes are currently in charge of the English innings, as they would be making sure on day 3, that England cruse comfortably towards first innings total, set by India, while the Indian spinner are getting enough turn to trouble the English batsmen. Day 3, preview: Spinners expected to rule the roast

It was the pair of Jonny Bairstow and Ben stokes, who batted out until the rest of the day, as England continued to trail by 352 runs, while Ashwin finished the day as India s top wicket-taker with a couple of scalps. England also went past the 100-run mark, and are currently on 103 for the loss of five wickets.

The Visakhapatnam track was expected to assist spinners on Day Two. That s what the pitch report suggested. The spin troika of Moeen Ali, Adil Rashid and Zafar Ansari had some hopes not much but some. Day One was a disaster for them. None of the spinners could bag a wicket, for it is no dust-bowl. But again, they had hopes on Day Two. Alastair Cook started off with pace instead, given the moisture in the air and the fresh morning rays. It did not work though. The duo of James Anderson and Stuart Broad went wicketless, forcing Cook to introduce spin.

Virat Kohli looked comfortable. It is not new. His batsmanship has reached another level. At the other end was Ravichandran Ashwin. India had lost only 4 wickets with enough runs on the scoreboard. Moeen came into the attack, with no wickets in his tally. The first delivery he bowled produced no turn. Few more deliveries and still no sign of turn the pitch report spoke of. From the other end attacked leg-spinner Rashid. The deliveries were action-replay of the one bowled on Day One. Cook persisted with spinners for a while, for that was the only mode of attack. 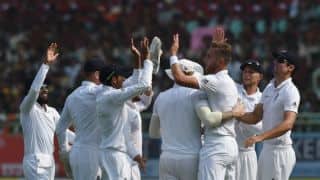