The live cricket streaming of India vs England, 2nd Test at Vishakhapatnam, Day 4 is available on the go on Hotstar.

Hosts India face off against visitors England on Day 4 of the second of the five-Test series at the Dr YS Rajasekhara Reddy ACA-VDCA Cricket Stadium in Visakhapatnam on Saturday, as the live cricket streaming of the match is available on the go on Hotstar, while the live telecast of the match is available on Star Sports and Star Sports HD1, along with the Hindi commentary on Star Sports and Star Sports HD3. Team India has a healthy lead of 298 runs as they were able to restrict England to the score of 255 which handed them a lead of 200 runs. Furthermore, the hosts have scored 98 runs for the three wickets at the end of Day Three. LIVE CRICKET SCORECARD: India vs England 2nd Test at Visakhapatnam

It was very much on the cards that England would show some fight at a display on Day Three as they had their wicketkeeper-batsman Jonny Bairstow and Ben Stokes at the crease. England started off their day with the score of 80 runs for the loss of five wickets, but the 110 runs stand for the sixth wicket between Bairstow and Stokes saw England reaching to a total of 190 runs. Both these batsmen when on to score their individual half-centuries guiding the tourists out of the shadows of follow-on which looked very much on cards. It was Umesh Yadav s good length delivery which broke this partnership as he dismissed Bairstow sending the stump to a cartwheel. READ:India vs England, 2nd Test, Day 3 report: Virat Kohli, Ajinkya Rahane weather Stuart Broad, James Anderson’s fiery spell

Adil Rashid did show some good batting along with Stokes as they both went on to put more 35 runs but Stokes wicket saw the end of this partnership at the right time as they both too were looking all poised. England eventually ended their first innings on the score 255, thanks to Ravichandran Ashwin s 22nd five-for of his career. Ashwin ended the first innings with the figures of 5 for 67, while Mohammad Shami, Umesh Yadav, Ravindra Jadeja and Jayant Yadav picked up one wicket each.

With the 200 runs lead already intact, Team Indian got off to a disastrous start yet once again as both the openers KL Rahul and Murali Vijay departed quickly for the scores of 10 and 3 respectively. Cheteshwar Pujara who scored a brilliant hundred in the first innings soon followed both the openers as he was dismissed by a peach of a delivery from James Anderson. India were tottering at the score of 40 for the loss of three quick and big wickets and were sensing trouble as they were letting go off a good lead that had received.

But once again, it was Virat Kohli who came to his team s rescue and resurrected the fallen Indian innings with his deputy Ajinkya Rahane on the other end of the crease. Kohli played an aggressive innings since the time he came out to bat and displayed a good example of a counter attack with his bat. He is currently at 56 runs off just 70 balls while Rahane is playing at 22 runs from 54 balls. These two have so far made 54 runs stand for the 4th wicket and these two will have to carry on for the maximum time they can as these two have the capacity to take India to a dominating position on Day Four.

India will be looking to bat at least till the third session on Day Four. They would be hoping to at least score 300 + runs in their second innings which will take their lead to a 500 + total which should be a huge total to chase for any team. 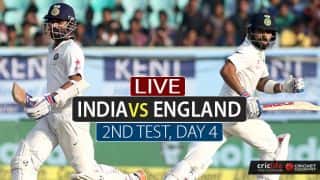