India have the edge in the game with a lead of 318 and having removed the England openers Alastair Cook and Haseeb Hameed at stumps of Day Four.

It is Day Five of the second Test between India and England at Dr YS Rajasekhara Reddy ACA-VDCA Cricket Stadium in Visakhapatnam. The live cricket streaming of the match is available on the go on Hotstar, while the live telecast of the match is available on Star Sports and Star Sports HD1, along with the Hindi commentary on Star Sports and Star Sports HD3. India have the edge in the game with a lead of 318 and having removed the England openers Alastair Cook and Haseeb Hameed at stumps of Day Four. With just a day remaining in hand, it looks potentially impossible for the visitors to get to the required runs while surviving the Indian bowling attack can take them to yet another draw in the series. LIVE CRICKET SCORECARD: India vs England 2nd Test at Visakhapatnam

Late strikes by Indian spinners jolted England after skipper Alastair Cook’s dogged half-century gave the visitors hope on the fourth day of the second Test in Visakhapatnam on Sunday. Chasing a mammoth 405 for victory, England were precariously placed at 87 for two at stumps, with Joe Root batting on five as Cook’s stubborn resistance came to an end with the close of play. Left-arm spinner Ravindra Jadeja trapped Cook lbw for 54 and even though the batsman reviewed the decision, the on-field umpires call was upheld. Cook fought hard with fellow-opener Haseeb Hameed (25) as the duo put on 75 runs in 50.2 overs before India’s premier spinner Ravichandran Ashwin broke through. Hameed, who impressed on his debut with a well-made 82 in the second innings of the Rajkot Test, batted with grit during his 144-ball stay before being trapped lbw off Ashwin on a delivery that stayed low.

The batting effort came after Stuart Broad shrugged off a right foot injury to claim four wickets and help dismiss India for 204 in their second innings. England have their backs to the wall with only four teams – West Indies, South Africa, India, Australia – getting more than 400 in the fourth innings to win a Test. Cook, who was castled by Mohammed Shami for two in England’s first innings, showed tremendous application during his 188-ball stay. Cook did survive a few DRS calls when India decided to review two lbw appeals from Jadeja and Ashwin, but the third umpire upheld the on-field calls on both occasions. Cook, who had struck a delightful 130 in the second innings of the drawn Test in Rajkot, went on to record his 53rd Test fifty. The visitors need to scale a mountain of runs or bat out three sessions for a draw.

Earlier Broad and Adil Rashid claimed four wickets apiece as India collapsed from 98 for three at the start of play, losing their last seven wickets for 87 as captain Virat Kohli top scored with 81. England’s target would have been less daunting but for a stubborn last-wicket partnership of 42 runs between Shami and Jayant Yadav, who finished unbeaten on 27, that delayed the scheduled lunch break by 20 minutes. Broad struck early to send overnight batsman Ajinkya Rahane back for 26 in the fifth over of the day. The wicket ended the 77-run fourth-wicket partnership between Rahane and Kohli. Leg-spinner Rashid soon swung into action with four wickets including that of Kohli who added 25 runs to his overnight 56. India scored 455 in their first innings and England replied with 255, reported AFP. 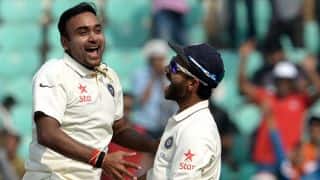