India will lock horns with England in the third of the five-Test series at Mohali on Saturday. The live cricket streaming of the match is available on-the-go on Hotstar app, while the live telecast of the match is available on Star Sports 1 and Star Sports HD1, along with the Hindi commentary on Star Sports 3 and Star Sports HD3. All the same, India are likely to play the same starting XI. However, Virat Kohli believes in horses for courses and might as well surprise us with last-minute changes. For that matter, India have replaced Gautam Gambhir with Bhuvneshwar Kumar. LIVE SCORECARD, INDIA vs ENGLAND, 3rd TEST AT MOHALI

An opening fast pacer in place of an opening bowler seems to be an idea. Otherwise, it is difficult to find a logic. Nonetheless, the Mohali track has a reputation of giving assistance to pacers, extracting more bounce and swing. As a result, playing Bhuvneshwar would might as well be a good idea. However, the pace duo of Mohammad Shami and Umesh Yadav have been in a blistering form of late, and would be unfair to drop either of them. On the other hand, having Bhuvi in the line-up would add depth in the batting department.

England, however, will make a couple of changes. Given Ben Duckett has failed to make an impact in the series so far, Jos Buttler will get a nod. But that also changes the line-up. “Jos is an extremely talented cricketer and we ve all seen that in the one-day and Twenty20 format. He s right up there with the best short-form players in the world and he s earned an opportunity to come and play here.”

“He [Bairstow] had a glint in his eye when I said we d like you to move up to five. It gives him more chance to bat. He bats at five and keeps at Yorkshire so he s used to that role.”

About Broad’s injury, Cook added, ” You wouldn t know that his foot was as bad as it was. But the specialist s advice is that there is a risk of it going totally and he would then be out for a period of time. They were quite surprised how well he got through those four-and-a-half days after doing it in the third or fourth over of the match. If he played here and did more damage to the tendon in the second over then you d look stupid.

India should not forget that despite being 1-0 after the first two Tests in the last two series, England managed to lift the series trophy. 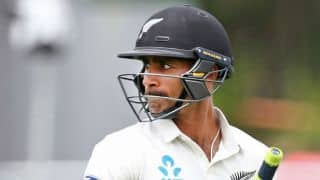 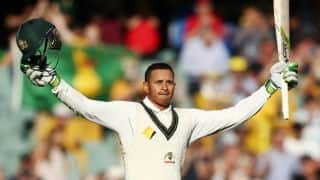