The live cricket streaming of India vs England, 3rd Test at Mohali, Day 3 is available online on Hotstar, while the live telecast is available on Star Sports Network.

Earlier on Day Two, Ravichandran Ashwin and Ravindra Jadeja tightened the screws as they piled up pressure on England on Day Two of the third Test at Mohali. However, India still trail England by 12 runs. The pair rescued India to a safe zone after they were struggling at the score of 205 for 6. Ashwin is currently on 57 and Jadeja on 31. They have added 67 for the seventh wicket. Not only Ashwin, skipper Virat Kohli (62) and Cheteshwar Pujara (51) have registered half-centuries as well. For England, Adil Rashid has claimed 3 for 81 and Ben Stokes 2 for 48. India vs England 3rd Test Day 3 Preview and Predictions: Hosts look to make amends

On Day Two, India dominated the first couple of sessions. They did not allow the England tail to take them to get away. The tourists added a mere 15 for the last two wickets and bowled out for 283. India lost Parthiv Patel and Murali Vijay before Pujara and Kohli salvaged the situation, and went to tea at 148 for 2. Nevertheless, England turned the tables around: Pujara went first, unable to clear the fence with a pull; Ajinkya Rahane was trapped leg-before for a duck; debutant Karun Nair was run out by an outstanding direct hit from Jos Buttler; and Kohli himself edged one to Jonny Bairstow. India vs England, 3rd Test: More records for Ravichandran Ashwin

The mini-collapse on Day Two might have ended the hopes of a big win for the hosts in this tie. Though they hold upper hand as of now, they still have a job in their hands. The onus is on Ashwin, Jadeja and Jayant Yadav, first to bat for as long as possible on Day Three, then to take wickets on a third-day pitch when their turn comes.

As for England, they have a hard work ahead if they stand any chance to win this tie. They are already trailing 0-1, and a big Indian lead would reduce England s chances of staying alive in the series. Their primary aim will be to get rid of the Indian innings as soon as possible. Once England do that and bat sensibly for a day or more, the momentum may shift their way with the pitch being expected to crack and assist the spinners in the later phases of the game. 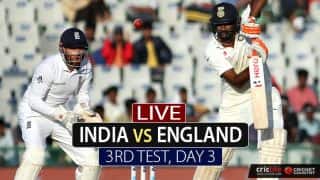