Murali Vijay and Cheteshwar Pujara will resume batting as India take on England on Day Three of the fourth Test.

Earlier, winning the toss, England had elected to bat first. Captain Alastair Cook opened the innings with debutant Keaton Jennings. Cook and Jennings added 99 before Cook departed for 46. Jennings continued, adding 37 with Joe Root (21), and 94 with Moeen Ali (50). Jennings soon became the third England batsman to score a hundred on debut against India. At one stage England were 249 for 5, but crucial contributions came from Jos Buttler (76), Ben Stokes (31) and Jake Ball (31). England posted exactly 400 runs in their first innings after Buttler added 48 with Stokes and 54 with Ball. In the absence of Mohammed Shami, Ravichandran Ashwin (6 for 112) and Ravindra Jadeja (4 for 109) did all the damage.

In response, KL Rahul and Murali Vijay began aggressively, adding a quick 39. Rahul was bowled for 24, attempting to push Moeen against the turn. This brought Pujara to the centre. Vijay got to his 13th half-century and remained unbeaten at 70 while Pujara remained unbeaten at 47 at stumps of Day Three. The pair have already added 107, and unless they are separated early on Day Three, England can be in a spot of bother. At this stage, however, England still lead by 254. One must remember that India will miss Ajinkya Rahane in this Test after he was ruled out of the Test with a broken finger. This will mean that Virat Kohli will have to bear the responsibility of making the bulk of the scoring once the Vijay-Pujara stand is broken. Young Karun Nair will try to make amends for his run out in the previous Test. India also have the advantage of a fairly competent set of bowlers who can bat: Ashwin, Jadeja, Jayant Yadav, Bhuvneshwar Kumar and Umesh Yadav all have First-Class hundreds.

India are currently 2-0 up in the 5-Test series. India had held on to a stubborn draw in the first Test at Rajkot, but thereafter dished out comprehensive defeats to England at Visakhapatnam and Mohali. The fifth Test of the series is scheduled to be played at Chennai. India have not won a Test series against England since 2008-09.

In other news, umpire Paul Reiffel, suffering from concussion after he was hit by a throw from Bhuvneshwar, has been ruled out of the Test. He has been replaced by Marais Erasmus, who was the original appointed third umpire for the Test. 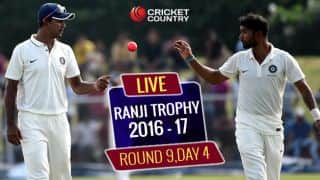