The live cricket streaming of India vs England, 5th Test, Day 2 is available online on Hotstar, while the live telecast of the match is available on the Star Sports Network.

The teams did not get net sessions as practice wickets were not ready courtesy cyclone Vardah but the groundsmen at Chennai did a fabulous job to ensure the Test started on time. Once again, England skipper Alastair Cook won the toss and elected to bat. The English openers failed to make another opportunity count. Though Cook became the 10th player to enter the elite 11,000 runs club, he was again dismissed by Ravindra Jadeja the fifth time in the series.

Moeen Ali’s fifth Test ton put England in a commanding position on Day One as they ended with 284 for 4. Moeen is batting on 120 and was well supported by Joe Root, who departed for a well-made 88 and Jonny Bairstow, who gave it away on 49. He is currently batting with all-rounder Ben Stokes.

India did not have a great day in office but Virat Kohli will look forward to finish the year on a high, winning the final Test that they play in 2016 and maintain India’s supremacy at the No. 1 position. India were pegged on the back foot when they lost their Wankhede Test’s hero Jayant Yadav to a hamstring niggle. Even England are missing their star pacer James Anderson but Stuart Broad is making a comeback.

There is plenty of action in store for this weekend and especially on Day Two and in busy times like these, live streaming is a respite. 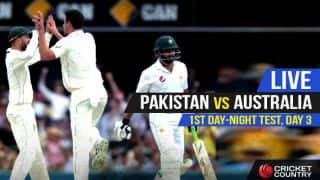