Virat Kohli is happy to have buried the demons and that too in trying circumstances as he scored his maiden Test century in England.

Virat Kohli is receiving praises from all quarters for his superlative century that has put India back in the contest in the ongoing Test against England at Edgbaston. From the depths of 169/7, Kohli showed great resolve to push his team forward and when he was out on 149, India had scored 274, falling short of England’s first innings total by 13 runs.

With this knock, Kohli has silenced his critics who had questioned his failure to score runs in England as far as Test cricket goes. Not that criticism wasn’t based on solid grounds. On his last tour of England, Kohli managed 134 runs across 10 innings.

Kohli has surpassed that tally in just one innings.

And the India captain is happy to have buried the demons and that too in trying circumstances. When Kohli walked in to bat, India were 54/2. And soon from the other end, he saw the likes of Shikhar Dhawan (26), Ajinkya Rahane (15) and Dinesh Karthik (0) departing in quick succession leaving the team in deep trouble.

And then Kohli took over.

“I tried to prepare myself as best I can and just help my team in every way possible,” Kohli told bcci.tv in an interview after the second day’s place. “It wasn’t only about getting to the three-figure mark but to continue from thereon. I was very disappointed when I got out because we could have taken a 10-15 runs lead but in the hindsight we wouldn’t have been able to bowl. So, just accept what god has blessed on me and I am just very happy with my preparations and not worried about the world.”

After the fall of Hardik Pandya and R Ashwin, Kohli had to farm the strike with the tailenders as England looked to gain a sizeable lead.

But the 29-year-old, having survived two dropped catches, made England pay dearly for their lapses. “It was difficult obviously but I told myself that it’s important to enjoy this and took it upon me as a challenge to take the innings far and take it deep. So it was a test of physical and mental strength. But I am glad we could come close to their total and we’re pretty much in the game. So when you help the team that way it obviously feels great,” he said.

With half the side back in the pavilion, the India scorecard made for a grim reading – 100/5. Pandya joined Kohli and the pair added 48 runs for the fifth wicket. Ashwin (10) and Mohammed Shami (2) also couldn’t too much but Kohli but Ishant Sharma and Umesh Yadav stuck with their captain, allowing him to reach the three figures and closer to the home team’s total.

Kohli was full of praise for the duo, saying he’s proud of the way the pair responded to the challenge. “I have to commend the tail as well. Hardik batted really well after we lost five and then Umesh and Ishant applied themselves. It was an outstanding effort from them also. So I have to give a lot of credit to them also because they stuck in there, they supported me really well and I could feel confident about them being out there which is very important. I am proud of both of them,” Kohli said.

When asked whether he rates this as his best knock, Kohli said second innings centuiry against Australia in Adelaide continues to be special to him but and rated the Edgbaston knock as the second best. “I am not sure. This could probably come second to Adelaide. It remains very special to me. Because it was second innings and we were chasing a target and I had total clarity that we are going for the target and not once though we aren’t. That was a beautiful zone to be in but today I am very happy and really grateful for having this opportunity to help the team this way and pull us back in the Test and compete. That’s what we are here to do. We are here to compete and fight and we are going to do that,” he signed off. 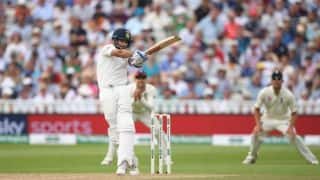 India vs England 2018, 1st Test, Day 3 LIVE Cricket Streaming: Teams, Time in IST and where to watch on TV and Online