ECB has appointed former Pakistan off-spinner Saqlain Mushtaq as a spin consultant to the national cricket team for its upcoming tour of India.

Karachi: The England and Wales Cricket Board (ECB) has appointed former Pakistan off-spinner Saqlain Mushtaq as a spin consultant to the national cricket team for its upcoming tour of India. Saqlain will reach India on November 1 and remain with the English team for 15 days, helping them prepare for a Test series, which is expected to be played on spin friendly pitches. The five-Test series is starting on November 9. “I have been entrusted the task of helping the English spinners prepare for the series in India where normally pitches help the spinners,” he said. FULL CRICKET SCORECARD: India vs England, 1st Test at Rajkot

“I will also be giving tips to the English batsmen on how to counter the Indian spinners on their home pitches. It should be a challenging assignment,” Saqlain added. The off-spinner toured India in 1999 with the Pakistan team and shone with ball in the Test matches to help his team win in Chennai and Kolkata with a bagful of wickets. “I am hopeful my advice will be helpful the England players in India,” he said. Saqlain, who is based in the United Kingdom, said he had no concerns over travelling to India despite the ongoing tensions between the two countries. “I am not expecting any negative reaction in India to my presence there,” he said. IND vs ENG: BCCI agrees to use DRS for Test series

Saqlain, now a British national, said he didn’t expect any problems in India since he would be part of the touring contingent, which would be given foolproof security in India. Credited with inventing the “Doosra” delivery, Saqlain has worked as spin consultant with the West Indies, New Zealand, Sri Lanka, Bangladesh and England teams in the past.

Ironically he has never got a permanent coaching assignment from the Pakistan Cricket Board. In 2015 also Saqlain had worked with the England team during its series against Pakistan in the UAE and faced taunts of traitor from some quarters. 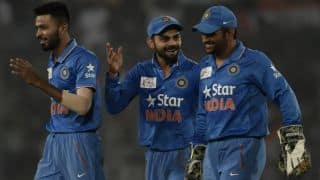