England have Steven Finn and Jake Ball in the squad as pace backup for the marathon five-Test series.

England fast bowler Stuart Broad has all but ruled himself out of the third Test against India, saying a strained tendon will need another couple of weeks to recover. Broad, who shrugged off his foot injury to claim four wickets and help dismiss India for 204 on Day Four of the ongoing second Test, believes injuries are an occupational hazard. England are chasing a historic target of 405 against India and are currently 87 for 2 at stumps on penultimate day of the second Test at Visakhapatnam. Live Cricket Scorecard: India vs England 2nd Test at Vizag

“So physically it has been quite a tough Test match but it’s all part of the job that you have to crack on a little bit. I think there are plans to move on once this Test match is finished to try and offload the tendon a little bit for a few days,” stated Broad, who returned with impressive figures of 4 for 33 in India’s second innings.

Meanwhile, Broad also remained positive of England chasing down India’s 405 on Day Five of the ongoing Test and said, “We are still in this Test match. It will be great to sit and chat with those who batted this afternoon and take that into the next day.”

After this, the action shifts to Mohali for the the third Test starting Saturday while the fourth match commences on December 8.

“You have got 17 days to Mumbai which is quite a long time, slightly less for Mohali, try and get fit for the next one but definitely be fit for Mumbai,” added an optimistic Broad of his timely return from injury.

Broad’s injury has added to the woes of a team already missing leading paceman Chris Woakes who is nursing a knee injury.

Woakes’ replacement James Anderson has just returned to action after recovering from a shoulder injury. England have Steven Finn and Jake Ball in the squad as pace backup for the marathon five-Test series. The first Test at Rajkot ended in a draw. 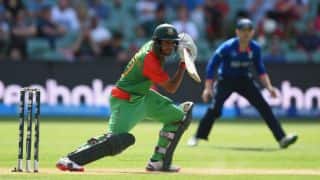