The India vs England five-Test series begins today. It promises to be a hotly contested affair with the no. 1 ranked India aiming to bury the demons of its 1-3 defeat in 2014. The series also offers India captain Virat Kohli a chance to improve his record in Test cricket on English soil.

The first match starts from August 1 at Edgbaston followed by Tests at Lord’s, Trent Bridge, The Rose Bowl and Kennington Oval.

India had just one tour match to prepare for the high-profile series when they faced Essex last week. The three-day affair petered out into a draw during the third session of the final day when rain forced an early end. India, who batted first, were all out for 395 with Murali Vijay, Kohli, KL Rahul and Dinesh Karthik scoring half-centuries each. In reply, Essex declared their innings on 359/7, handing India 36-run lead. In reply India were 89/2 in 21.2 overs when the match ended.

Shikhar Dhawan failed to open his account in both the innings while Cheteshwar Pujara too failed to impress. Among the Indian bowlers, Umesh Yadav was the top performer with figures of 4/35 followed by workhorse Ishant Sharma who took three wickets.

Here’s the full schedule of India vs England Test series :- Sri Lanka vs South Africa 2nd ODI Live Streaming: When and where to watch and follow live 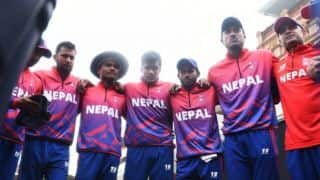 Netherlands vs Nepal 1st ODI Live Streaming: When and where to follow and watch online