Monu Kumar, Chama Milind strike with a wicket each.

India have hit back after the England openers started off decently during the ICC Under-19 World Cup 2014 quarter-final at the Dubai International Cricket Stadium. England lost the wicket of Harry Finch and Ryan Higgins in quick succession. They are 39 for the loss of two wickets in 10 overs.

Jack Tattersall helped England off to a good start with some graceful shots to the boundary. However, Harry Finch was then trapped leg-before by Monu Kumar. It was a delivery that swung back in and caught him plumb in front. Meanwhile Ryan Higgins, the No 3 batsman, scored only one before spooning a catch to cover off Chama Milind. It was short and wide and there to be hit, instead Higgins hit it straight to Sanju Samson.

Deepak Hooda then came on to bowl his off-spinners and picked a wicket soon as Jonathan Tattersall spooned a catch back to him. 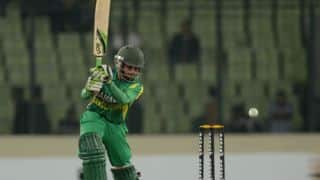