India vs England: Virat Kohli should give consistent run to his batters, says Sourav Ganguly
By CricketCountry Staff

Virat Kohli put up a standout performance with the bat for India, scoring 200 runs across the two innings of the India vs England, 1st Test at Edgbaston. He waged a lone battle for his team even as the other batsmen around him crumbled to pace and swing. And Sourav Ganguly feels that while Kohli will be questioned for the defeat as he is the captain, others around him need to show more intent.

He said that Kohli as a batsman has performed but needs to do more in his role as a leader. India dropped Cheteshwar Pujara from the opener after a poor return from his county stint earlier this year. The decision came as a surprise to many and under the cloud of defeat, the criticism has attained a more brutal proportion.

READ: Kohli should take some responsibility for loss – Nasser

The failure of Murali Vijay and Ajinkya Rahane has also rankled the Indian team management but Ganguly has advised against making any rash decision.

“Ajinkya Rahane & Murali Vijay will have to show some determination since they have scored runs in these conditions before. I don’t think the captain is responsible for the loss. If you’re the captain then you’ll be criticised for a loss the same way as you’re congratulated for a win. One criticism for Virat Kohli is that he should give a consistent run to his batters & more time before dropping them. The failure against swing in English conditions can’t be used as an excuse any more as everyone knows that its what you get when you come to England,” Ganguly wrote on Instagram.

Ganguly criticised the continues chopping and changing of India’s Playing XI India, under Kohli, have need fielded the same XI in successive Tests. He reckons that this strategy negatively affects the confidence of players. “The captain should give confidence to his players. It’s his team & only he can change their mindset. He will have to sit with them & tell them that if he can do it so can they. He should give them time & tell them to go out & play without any fear. It is true that after continuous chopping & changing of the playing XI, players can get afraid that after all these years they’ve failed to garner the faith of the team management,” he wrote.

Ganguly feels that swinging conditions can no longer be given as the reason for the failure of batsmen as it’s not something that the team was unaware of. “You can’t be excused all the time & we have lost before in 2011 & 2014. You’ve to bat well. It’s a very well known fact that the ball will swing in England the same way as Australia is known for its pacy wickets. So if previously you’ve scored runs there is no reason you can’t now,” he wrote.

India now trail 0-1 in the five-match series but Ganguly, who is in England, believes that Kohli’s men have the capability to bounce back.

Citing examples of the previous teams, he wrote, “The good thing about the great teams of the past – whether it be Australia, South Africa or our very own team which won the Test series here in 2007 – was that the boys used to play both formats of the game – Sachin Tendulkar, Rahul Dravid, Virender Sehwag, including myself. So even if you played badly in 1 or 2 matches you got a lot of time to get back into form at the international level. Playing & scoring 150 in first-class cricket can’t compensate for international cricket. In this team no batsman except Virat plays all the formats.

“If you’ve to win a Test then everyone has to score runs. The other batsmen have to score 100’s as well. Virat Kohli played very well otherwise India would have been out of the match on the 2nd day itself. This was the first Test in a 5 match series & I think this team has the capability to come back & play well.” 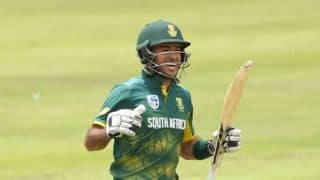