Saha mentioned how he pushed himself to the limits to be fit in time for the England tour, but didn t get the green flag from the physios.

India s first-choice wicketkeeper, Wriddhiman Saha, who underwent surgery on his shoulder in July, regrets not being part of the Indian squad currently in England playing a five-Test series. It was believed that Saha who last played a Test for India during the South Africa tour in early January was nursing a thumb injury, but the BCCI announced in July that it was in in fact, a serious shoulder to his shoulder that kept him sidelined.

Speaking to Cricbuzz, Saha mentioned how he pushed himself to the limits to be fit in time for the England tour, but didn t get the green flag from the physios.

“I pushed myself but it wasn’t meant to happen. Everyone keeps talking about England tours. I have been on tour with the team in 2014, it is a real test not just for the wicketkeepers but for everyone to go there and do well,” Saha said. “I wanted to test myself there in such a valuable series, I wanted to test my pedigree. I don’t know the specifics but maybe because I had taken those injections twice before and hence the third didn’t work as effectively.

“Again, the doctors can tell you better – the period of treatment and rehab keeps reducing with every injection but when I took the third, I wasn’t getting my full range of movement and on an England tour, you don’t want to let your team down by going 50-60 percent fit.”

Saha weighed in on the challenge of keeping wickets in England. Dinesh Karthik, who was named Saha s replacement, played the first Two Tests but after cutting a sorry figure with both bat and gloves, he made way for young Rishabh Pant. At Trent Bridge, Pant took seven catches and became the first Indian wicketkeeper to five dismissals in debut innings. In the next Test at Southampton though, the 20-year-old found it a test keeping wickets to the moving ball.

“In English conditions, catching is always difficult. The ball does things even at the last moment, at times due to slight breeze, at times due to heavy weather. The key is to watch the ball into your hands. A lot of it boils down to confidence too,” Saha said.

“A lot depends on the ‘keeper with regards to where the slip fielders would stand. The kind of carry, bounce the wicket has and the pace of the bowler. The amount of movement every bowler gets is different, plus the biggest factor is you got to factor in the reaction time too. I have a pair of gloves, the slip fielders won’t have it, so you got to allow them that extra yard, can’t just be that the ball is falling short and everyone keeps moving forward.”

Saha however, gave no estimate as to when he will be seen back on the cricket field. Initially, the shoulder was said to require two months to recover, but that timeframe seem to have changed and Saha could be out longer than expected.

“Safe to say, it will take four months,” said Saha. “Getting back on the field is not on my mind right now, my focus is to just do the things I am being told to on a daily basis. I have just started the rehab two days back at the NCA, I haven’t been told how long I would need to be here. But yes, a stretch of 3-4 months can take a toll, so I will be given breaks and be with family, come back and resume the rehab, something on these lines.”

This rules out Saha s availability for the tour of Australia starting in November. India s next Test assignment is not until post 2019 World Cup, a two-match series against West Indies in July, by which Saha will be 34. Does he see himself being drafted back into the side?

“Trust me, I am not thinking about how the positions would be in the team in four months’ time,” Saha said. “It is always 3-4 days ahead of a game that I start thinking hard about the game. The thought now is whenever I return, I will try to do my best in the domestic games. I don’t know at what stage of the tournament will I return. It is about day by day work on this shoulder.” 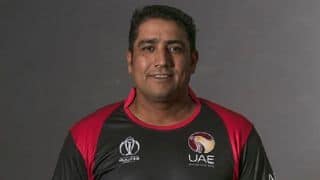