Wriddhiman Saha is still recovering from the thumb injury that sidelined him from India s last Test in June.

Wriddhiman Saha s participation in the first half of India s Test series against England remains in doubt after news emerged Sunday that the Bengal wicketkeeper-batsman is still recovering from the thumb injury that sidelined him from India s last Test, in June. As reported by ESPNCricinfo, Saha still requires time to heal the left thumb he injured during the IPL. When BCCI had confirmed that Saha would not keep wickets during Afghanistan s Test debut last month, it has estimated the 33-year-old s recovery period at five to six weeks.

Saha had earlier been ruled out of the second and third Tests of the South Africa tour in January. In the first Test at Cape Town, however, he took an Indian record of 10 catches, and was replaced by Parthiv Patel.

The first Test between India and England starts August 1 at Edgbaston, and in all likelihood Dinesh Karthik will continue to keep wickets. He had taken over the role against Afghanistan in June and is part of India s ODI team in England. India play a four-day tour match against Essex from July 25. 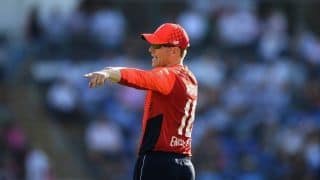