Ishant Sharma, Umesh Yadav and Shardul Thakur had one wicket each to show for their efforts while Hardik Pandya and Mohammed Shami bowled six and seven overs, respectively, without any success.

Indian bowlers had to tough it out in the second session of their only tour match ahead of the England Test series against Essex at Chelmsford as they could claim only three wickets in the 34 overs they send out.

Ishant Sharma, Umesh Yadav and Shardul Thakur had one wicket each to show for their efforts while Hardik Pandya and Mohammed Shami bowled six and seven overs, respectively, without any success.

For Essex, skipper Tom Westley led from the front scoring 57 – the sixth player to register a 50 plus score in the match – with the help of 11 boundaries but was caught by Ravindra Jadeja off Thakur.

After the hosts lost both their openers Nick Browne (11) and Varun Chopra (16) by the 16th over, Westley and 20-year-old Michael-Kyle Pepper combined for a 68-run stand to steady the ship and took Essex past the 100-run mark.

Peppers, who has just one First-Class game to his name, started off well earning himself three boundaries of the first ten balls he faced and then went to add six more to his tally and making 41 off 47 by the time tea was taken.

Earlier in the day, India s first innings on day two could only last 16.2 overs as they lost four wickets for 73 runs. India were eventually bowled out for 395 with Rishabh Pant having a crack at Essex bowlers with an unbeaten 34 off 26 deliveries.

Dinesh Karthik, resuming on overnight score of 82, got out off the first ball of the day after he cut a short and wide delivery towards third man where Dixon took a diving catch. Next man in, Karun Nair, could only last 12 deliveries before he played one on to his stumps to depart for four.

Hardik Pandya got to his half-century off 81 deliveries but became Walter s fourth victim of the innings the ball after. He made 51. Pant hit his shots helping himself to six boundaries before Ravindra Jadeja was picked up by Dixon for 15, signalling the end of the Indian innings.

In reply, Umesh Yadav got an early breakthrough getting rid of opener Nick Browne for 11. At lunch, Essex had reached 18 for one with Varun Chopra batting on two and skipper Tom Westley on four. India send down eight overs in the session split between Mohammed Shami and Umesh. 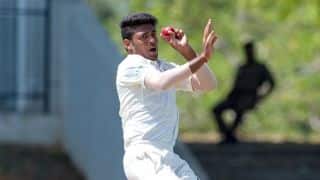 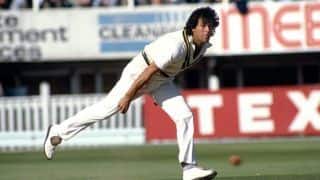