This is India's first practice match of the tour.

India 333/4 Overs 90
R Sharma 43(64), A Rahane 47(77)
Impressive performances by their batsmen as India would be pleased with their efforts on their opening day of this marathon tour. Three batsmen scored half-centuries, and two are nearing the feat in this match. Rohit Sharma and Ajinkya Rahane have added 74 runs as India end the day with 333 runs on the board. Shikhar Dhawan’s injury remains a concern as there is no update on it yet.
India 269/4 Overs 73
R Sharma 3(7), A Rahane 23(32)
Cheteshwar Pujara has retired out after completing his half-century. He faced 98 balls, struck eight fours and scored 57 not out. Another Indian batsman has had a good run in the match. Rohit Sharma has joined Ajinkya Rahane at the crease.
India 241/3 Overs 68
C Pujara 47(92), A Rahane 8(15)
Back after tea for the final session of Day 1. Both the batsmen will be looking to get fifties under their belt. But it’s not a good start for India. Virat Kohli has been clean bowled by Shiv Thakor. He departs for just 29. Ajinkya Rahane is the new man in. Kohli will be disappointed to not get some more runs under his belt. But he will get more chances before the series begins.
Meanwhile, Pujara has looked rock solid at the other end. India need him in this series.
OUT! V Kohli 29(49)
India 214/2 Overs 59
C Pujara 37(67), V Kohli 24(35)
The 200 is up for India now and that is Tea at Grace Road. All the batsmen have had a decent hit out in the middle so far. First Dhawan scored a fifty. Then Gambhir. And now Pujara and Kohli too are looking very comfortable out there. Good signs for India early on in the tour.
Atif Sheikh and Anthony Ireland have been the most economical bowlers so far for Leicestershire.
India 173/2 Overs 49
C Pujara 23(36), V Kohli 1(6)
Gautam Gambhir has retired after making a half-century. This innings would give the left-handed batsman much-needed confidence ahead of the Test series. Over to Cheteshwar Pujara and Virat Kohli now. Gambhir scored 54 off 101 balls with the help of seven fours.
India 120/1 Overs 36
G Gambhir 26(60), C Pujara 0(5)
Play begins after lunch, and India continue to look good. Shikhar Dhawan retires hurt after getting to 60. He was hit on the arm by a quick delivery from Sheikh. It could also be that he walks off so that the other batsmen get a knock. It bodes very well for India that he is showing some form. At the other end, Gambhir is looking solid.
RETIRED HURT S Dhawan 60(100)
India 106/1 Overs 29
S Dhawan 55(86), G Gambhir 21(37)
And that’s lunch. Dhawan has reached 55 not out with the help of 11 fours and Gambhir is on 21 not out. It’s been a positive start from India on this tour so far.
India 100/1 Overs 27
S Dhawan 51(80), G Gambhir 19(31)
Shikhar Dhawan is looking in supreme touch as he has raced away to a half-century. Dhawan is batting on 51 off 8o balls, having smashed 10 fours.
India 68/1 Overs 23
S Dhawan 33(66), G Gambhir 10(21)
India have recovered well after the loss of Murali Vijay. Shikhar Dhawan and Gautam Gambhir have batted confidently so far. Dhawan has struck six boundaries and Gambhir has hit one as well.
India 46/1 Overs 15
S Dhawan 25(43), G Gambhir 0(2)
Murali Vijay falls to Anthony Ireland after forming a decent partnership with Shikhar Dhawan. Gautam Gambhir is the new man in now. He will look to make it count.
OUT! M Vijay 20(51)

Hello and welcome to the live updates of India‘s first practice match during the tour of England, 2014 against Leicestershire. Having just arrived in England, the Indians will be treating this match as the ideal pace-setter for the rest of the tour.

India, in this 3-day practice match, have won the toss and have elected to bat first. The Leicestershire squad for this practice match isn’t the strongest, but the task can be expected to be tough for the visitors who are bound to take some time to settle into the English conditions. It will be a comeback series for Gautam Gambhir, and he would like to get a good hit in the middle. And the competition in the ranks for the openers’ slot among Gambhir, Murali Vijay and Shikhar Dhawan will heat up during these tour matches before the ultimate test begins.

With Ishant Sharma having not played international cricket in a long time, and the likes of Pankaj Singh and Stuart Binny getting their first England tours, the pacers and medium pacers too would like to get their rhythm going during these tour matches. 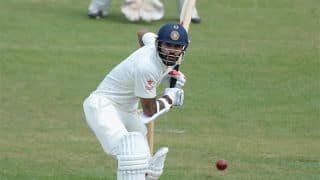