MID 138 | Overs 39.5
Karn Sharma cleans up the tail expertly and finishes with three wickets. This was a clinical display with the ball by the Indians and everyone gave a good account of themselves.
OUT! J Harris st Samson b Karn Sharma, G Sandhu lbw b Karn Sharma 0(1)
MID 103/6 | Overs 29
A Balbirnie 16(34), O Rayner 1(4)
Ravichandran Ashwin is having a very good outing here and he traps Simpson in front. The tail is exposed and India are running away with the contest
J Simpson lbw b Ashwin 19(40)
MID 100/5 | Overs 26
J Simpson 18(30), A Balbirnie 15(34)
MS Dhoni takes the field and there is a massive applause for the Indian captain. Simpson, meanwhile has enough of hanging around and swept Ashwin for a big six over deep mid-wicket.
MID 86/5 | Overs 23
J Simpson 10(29), A Balbirnie 9(24)
Simpson and Balbirnie are going steady and are trying to restore some parity. This will be a big test for people like Dhawal Kulkarni and Mohit Sharma. Dhawal has looked good and Ashwin has also got off to a good start.
MID 67/5 | Overs 17
J Simpson 0(7), A Balbirnie 0(2)
It was Dhawal Kulkarni who got an important scalp and India are in command. It was rather unfortunate as the well set Higgins got a leading edge and Dhawan took a simple catch to expose the Middlesex lower order, which doesn’t look that inspiring.

If you’re at Lord’s todya, there’s still time to see the @cricketworldcup trophy in the MCC Museum, behind the Pavilion.

MID 64/4 | Overs 15
R Higgins 17(26), J Simpson 0(2)
Eoin Morgan departs! This had good fortune more than anything else. Morgan stepped down the track, having had enough of sleepwalking and steps down the track and ends up nicking it to Samson to give the young wicketkeeper his third catch.
E Morgan c Samson b Mohit Sharma 15(25),
MID 60/3 | Overs 13
E Morgan 15(25), R Higgins 16(15)
Ryan Higgins has had his going easy so far. Mohit Sharma and Umesh Yadav have been are leaking runs and are struggling for control. Morgan is playing a sheet anchor’s role here and is building his innings patiently.
MID 43/3 | Overs 10
E Morgan 7(16), R Higgins 5(4)
Its the end of Paul Stirling. He was looking confident and struck three good looking boundaries and then gets a nick off a bad delivery which was going down the leg side and Sanju Samson takes another catch. Eoin Morgan needs to steady the ship and he finished the 10th over by whipping a boundary.
OUT! P Stirling c Samson 17(26)
MID 22/2 | Overs 7
P Stirling 13(19), E Morgan 0(8)
Mohit Sharma was wayward in his first over and was slapped for a couple of boundaries in his first over. It was unimpressive from IPL 2014’s highest wicket-taker. It undid the good work from Bhuvi and Shami

MID 12/2 | Overs 5
P Stirling 5(12), E Morgan 0(5)
Shami looked refreshed after a little break and and along with the ever reliable Bhuvneshwar, are being tidy and giving nothing away to the opposition.
MID 12/2 | Overs 4
P Stirling 4(5), E Morgan 0(5)
Bhuvneshwar Kumar and Mohammad Shami start proceedings and the Middlesex openers are playing with caution. With a low score to defend, India will have to snare early wickets. Shami gets one to get back and the highly rated Dawid Malan also departs and Indians have got off to a flying start
OUT! N Gubbins c Samson b Bhuvneshwar 4(3), D Malan b Shami 5(13),
IND 230 | Overs 44.2
Karn Sharma 8(12),
India are bowled out for 230. India are dismissed for 230 and Raina is the last man out. Raina tried to go for his shots and was caught out of his crease. Ollie Rayner finishes withy four wickets. Its been a solid bowling display to dismiss a quality attack.
S Raina st Simpson b Rayner 5(6)
IND 230/9 | Overs 44
Karn Sharma 8(12), S Raina 5(5)
Sanju Samson also fails to make an impact and India are reeling. They lost 2 wickets in three balls and the ‘tail’ is falling like nine pins. Not bad to have Suresh Raina walk in No 11 eh?
IND 218/8 | Overs 42
S Samson 1(1), Karn Sharma 6(4)
Stuart Binny fails to make an impact and is out for a golden duck. Karn Sharma is looking confident and with these two powerful strikers of the ball here. Expect some fireworks soon!
OUT! S Binny c & b Rayner 0(1)
IND 211/7 | Overs 40
A Rayudu 72(82), R Ashwin 18(22)
Rayudu retires after a wonderful knock. He should have been allowed to score a century which would have guaranteed a spot in the side. Meanwhile, Ashwin is trapped in front and he was looking good. He was ticking the scoreboard along and was trapped plumb in front.
A Rayudu retired out 72(82), R Ashwin lbw b Rayner 18(24)
IND 176/5 | Overs 35
A Rayudu 54(68), R Ashwin 2(6)
Another Indian batsmen falls off a poor shot and all of Kohli and Rayudu’s hard work is now going down the drain. Jadeja’s woes on the tour continue and Ravi Patel scalps his second wicket.
OUT! R Jadeja c Gubbins b Patel
IND 156/4 | Overs 30
A Rayudu 25(37),
Virat Kohli departs after a wonderful knock and was looking set. Virat Kohli was batting with such authority and this time he nicks it to keeper Simpson and Ravi Patel takes his wicket.
OUT! V Kohli c Simpson b Ravi Patel 71(75)
IND 119/3 | Overs 25
V Kohli 53(62), A Rayudu 25(37)
The stage is set for Virat Kohli to get his hundred. He has got to the half-way mark now. Rayudu is lending him good support in the middle. Once again, Kohli proves that with the blue jersey and the white ball, there are very few players of his ilk.
IND 104/3 | Overs 22
V Kohli 48(56), A Rayudu 15(25)
Kohli is growing in form and there are boundaries galore and Kohli just struck his eighth boundary. The shots are flowing from his blade and is even playing late cuts with ease.
IND 92/3 | Overs 20
V Kohli 38(47), A Rayudu 15(22)
Virat Kohli is going strong and Ambati Rayudu is playing his role to perfection. Rayudu, like Kohli got his eye in and has played a couple of lovely drives to keep the scoreboard ticking.
IND 76/3 | Overs 17
V Kohli 32(40), A Rayudu 7(11)
Virat Kohli is continuing to play some exquisite shots and it simply a joy to watch him in this touch. His timing has been perfect and the Indian No 3 in ODIs is determined to make use of this opportunity
IND 52/3 | Overs 14
V Kohli 15(26), A Rayudu 0(3)
After getting his eye in, India’s bad habit from the Test series continues as Rahane cuts and its straight to Steven Finn, who is in the thick of everything good thats happening in the middle today. This was truly disappointing from Rahane.
A Rahane c Finn b Harris 10(15)
IND 48/2 | Overs 11
V Kohli 15(26), A Rahane 10(15)
A little bit of width was offered and Kohli played a gorgeous shot through the off side. The Indian talisman though, is watchful and is determined to get a big score here.

IND 30/2 | Overs 7
V Kohli 8(16). A Rahane
Another on departs and its Rohit Sharma. This is truly a reward for Steve Finn’s impeccable line and length.
OUT! R Sharma c Sandhu b Finn 8(14),
IND 19/1 | Overs 4
R Sharma 6(10), V Kohli 0(2)
Dhawan misses out. Trying to heave one over mid-on, the southpaw fails to get the elevation right and Middlesex captain Malan takes a simple catch. Virat Kohli makes a cautious start. He was watchful in the two deliveries he faced.
S Dhawan c Malan b Sandhu 10(11)
IND 15/0 | Overs 2
R Sharma 2(5), S Dhawan 10(7)
Steve Finn started the proceedings and he bowls a tidy over. A good start during his comeback. The days to come will be crucial for Finn. Sandhu comes in and Dhawan whacks the hapless pacer for back-to-back boundaries and India are on the march.

Hello and welcome to CricketCountry’s Live Blog of India’s warm-up match against Middlesex at Lord’s. I am Nishad Pai Vaidya and I will be bringing the live updates of the match. After a disastrous Test series, it’s a fresh start all over again with some new faces in the set-up. India haven’t fared badly in One-Day Internationals (ODI), still ranking No 2 but at the same time they haven’t won anything in their previous two overseas ODI tours to South Africa and New Zealand. It becomes critical for the team to regroup and regain their confidence ahead of the all important series against England.

Skipper MS Dhoni and Bhuvneshwar Kumar are likely to be rested. There some interesting new talents to watch out for. Young Sanju Samson comes, all-rounder Karn Sharma and an experienced pacer from domestic circuit Dhawal Kulkarni are likely to play.

This is India’s only chance to test and shuffle the cards before the real game begins from Monday. Read the preview of the match here 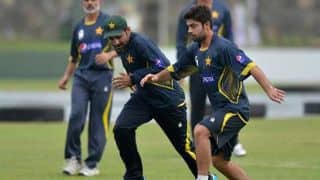