Shami may have hit top form but he's not losing sleep over a World Cup berth.

Shami had earned a recall to the ODI squad in the home series against the West Indies in October. Following a brilliant run in the Tests and ODIs in Australia, he carried his form into the opening ODI in New Zealand, taking three wickets for 19 runs.

The 28-year-old has overcome fitness and personal issues to give his best for India.

“It has been a long journey. I played the 2015 World Cup, then got injured and it took me two years to recover. After the rehab, I made it to the 2016 World T20 squad. Then after a while, I got full confidence and felt like I was back on track,” said Shami after becoming the fastest Indian to 100 wickets in ODIs. (ALSO READ: Shami credits Kohli, team management for keeping faith)

“You saw in 2018, I played regular Test cricket. The confidence level is very high, I am bowling with the same speed that I used to earlier. Hope I can continue this,” he added.

He was the second highest wicket-taker in the landmark Test series win against Australia with 16 scalps, only behind Jasprit Bumrah (21) and Nathan Lyon (21). So, ahead of the three-match ODI series against Australia, his confidence was sky high.

“I like Test cricket more than other formats. The way we have done in the last three-four series (as a bowling unit), it does your confidence a world of good. If the bowling unit is delivering, the pressure is divided and that helps you give your best,” he said. (ALSO READ: Mohammed Shami is fastest Indian to 100 ODI wickets)

He may have hit top form but Shami is not losing sleep over a World Cup berth. The big-ticket event is scheduled to be held in England from May 30.

“I am not thinking too far ahead. It depends on my fitness and performance when the team is picked. As I said, we have the best bowling unit. They can pick anyone.” 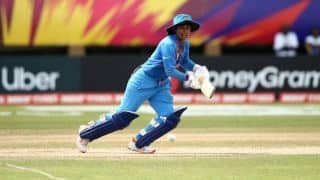