Dhoni said his team's failure to build partnerships was the cause of the defeat.

India skipper Mahendra Singh Dhoni said his team’s failure to build partnerships after losing early wickets was the cause of the defeat against New Zealand in the first One-Day International (ODI) and asked his batsmen to step-up with more consistent performances.

Chasing 293 for victory, India lost the first ODI of the five-match series by 24 runs despite Virat Kohli (123) scoring a superb century.

“We lost three quick wickets of Virat, Ravindra Jadeja and mine, and that was the turning point of the match,” said Dhoni at the post match press conference.

“That was when we needed a partnership and we need to learn out of this. It is important to get partnerships going.

The number four and five batsmen haven’t been consistent for us. Even if we don’t get hundreds or fifties from them, those slots are crucial when the opposition scores 280-300 runs.

After we lose early wickets, we need partnerships to rebuild and cannot play catch up, thus putting pressure on the lower middle order,” he added.

Dhoni, however, said the fact that the team got close to the target showed that the batsmen have a lot of firepower.

“At the same time, we can say that not many batsmen scored runs but we were still able to get close to 290 runs.

It means that we have got plenty of firepower. We just need to apply ourselves better and it will see us through,” he said.

Four out of the top six batsmen — Shikhar Dhawan, Rohit Sharma, Suresh Raina and Dhoni himself fell to short balls or bouncers, perhaps underlining a growing weakness in the Indian batting line-up but the wicketkeeper-batsman was quick to negate the theory.

“One of the options is, not to play the shot but our strength has been to play shots,” he opined. “At times we will get caught because it’s a difficult shot to play. But we need to play it and master this shot because overseas you cannot allow the bowlers to dominate and cannot leave all of them.

“But we can always pick and choose when to play and when not to play this shot,” Dhoni explained.

The Indian captain reserved special praise for his deputy Kohli whose valiant effort was denied by the Kiwis in the end.

“Virat is a free flowing batsman and he backs himself to play big shots. He knows what works for him and he picks and chooses his shots. If he gets a good start then he makes sure that he converts that start, getting to fifty and making a big score after that. More often than not he crosses the hundred-run mark, which is very important because you need one batsman to bat though the innings and the rest can rotate around him.

“Virat has done that really well so far, and hopefully he will carry it further,” he said.

Dhoni also applauded his bowlers’ efforts to restrict the Black Caps to a below par score.

“We didn’t start very well…in the first three or four overs we didn’t really bowl well. But after that we came back nicely. In the middle overs, the spinners also bowled well. We used a few overs off part-timers as Virat bowled and he also contributed. I think death bowling was really good. When one of their set-batsman was batting, we were able to contain them. So that’s a big positive out of this game,” he said.

Question was raised about the spinners who were able to take just one wicket from 19 overs with Ravindra Jadeja and Ravichandran Ashwin together giving away 113 runs while India searched for wickets in the middle overs.

“Their roles change when they play outside the subcontinent. The home teams will never make pitches that turn and they will have to keep experimenting with pace and length.

I think they bowled pretty well. They didn’t get wickets but they built some pressure in the middle overs, which is also very important,” defended Dhoni.

“Also, whenever we have played with four fast bowlers, the captain gets banned and we lose. So it doesn’t seem like an option for us,” he concluded. 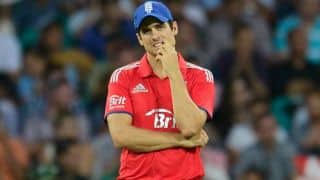