IND vs NZ, 1st semi-final, Cricket World Cup 2019, India vs New Zealand LIVE streaming: Teams, time in IST and where to watch on TV and online in India

Full details of when, where and how you can watch and follow 1st semi-final of Cricket World Cup 2019 between India and New Zealand at Old Trafford, Manchester. Also Check India vs New Zealand live streaming IND vs NZ Dream 11, IND vs NZ dream 11 prediction India vs New Zealand, LIVE streaming: Teams, time in IST and where to watch on TV and online in India

From remaining unbeaten in the first six matches, New Zealand s World Cup campaign has kind of skidded off the road following a hat-trick of losses against Pakistan, Australia and England. Some feel New Zealand don t even deserve to be in the final they only made it when Bangladesh scored an eighth run against Pakistan. But what matters is that New Zealand are here, with a hope of having pressed the reset button which Kane Williamson emphasised on after the loss to England.

Standing in front of them is India a side that has bossed the league stage. Do India have the upper hand? Most certainly. But can New Zealand prove Ian Chappell and many other like him wrong? Most definitely.

Dinesh Karthik s extended session in the nets could mean that he retains his place in the team and Kedar Jadhav waits out. Earlier this year, India s wristspin pair of Yuzvendra Chahal and Kuldeep Yadav had a lot of success against New Zealand but given the pasting they received at the hands of England s batsmen, India might stick Ravindra Jadeja partnering one of them mostly likely Chahal. If India go ahead with Jadeja and Chahal, it leaves them room for either Mohammed Shami or Bhuvneshwar to open the bowling with Jasprit Bumrah. Considering Bhuvneshwar s struggle against Sri Lanka, chances of Shami replacing him seem strong.

Tom Latham s half-century against England could seem him go up with Martin Guptill, which means Nicholls can slot in somewhere in the middle order. As for Colin Munro, with Bumrah s high success ration against him, the left hander could might as well continue warming the bench. Ferguson bowled with full steam and is set to take back his place in the XI replacing Tim Southee 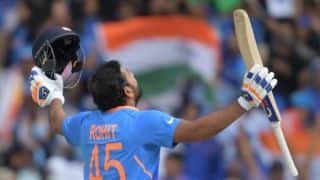