Virat Kohli has decided to bat first at Green Park, Kanpur as India get set to play their 500th Test at Green Park, Kanpur starting September 22. All eyes will be on this match as India will aim at winning their 500th Test and make history against visitors New Zealand. It is a good to win for Kohli as the Kanpur pitch is expected to turn as the Test progresses and the surface begins to crack a little. Kohli has once again showed faith in Rohit Sharma who failed to deliver in recent times and in the domestic circuit while playing in Duleep Trophy and New Zealand’s warm-up game against Mumbai at Feroz Shah Kotla. He has decided to go with four bowlers. However, Kane Williamson has backed his spin brigade by playing with three spinners.

Indian skipper Kohli said, “We will bat, looks like a pretty good wicket for Day One. Will look to put some good runs on the board and then try and get the opposition out. The start has been good in the West Indies and the preparation has been good for this series. We are raring to go. I couldn’t have imagined – I mean I have been inspired by all these legends having played – being the captain for the 500th Test and I will try my level best to take this team forward with the bunch of guys I have. I feel honoured. We have 6 batsmen, with 2 spinners and 2 fast-bowlers, and two batsmen will chip in as part-timers.”

New Zealand skipper Williamson expressed disappointment after losing the toss,  “Would have been nice to win the toss [chuckles before speaking]. Looks a very dry surface, would have liked to bat first but not to be. Had a good week at Delhi; acclimatized to the heat. The wicket looks different to the Delhi wicket. Looking forward to an exciting young team and looking forward to good spinners unraveling here on this pitch. We have 3 spinners, one being the all-rounder, and Boult and Wagner are the two fast-bowlers.” LIVE Cricket Score, India Vs New Zealand, 1st Test 2016, Day 1: India eye domination 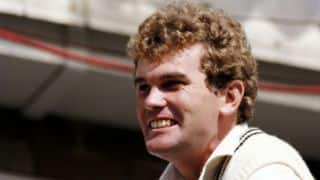 Martin Crowe: One of the greatest of the eighties and nineties