Brendon McCullum and Kane Williamson have rallied New Zealand after early losses and have anchored them to a position of relative safety in the first Test against India at Auckland. Earlier in the day, New Zealand had lost three early wickets as the Indian seamers used the early movement and caused great problems for the batsmen. New Zealand are currently 163 for three.

After Williamson got to his fifty, McCullum also got to his milestone and is looking in great touch. The fast bowlers are not finding the movement and they are being hit by the batsmen as New Zealand have scored over 100 runs in the session.

Ravindra Jadeja has also bowled his spin, but has been largely ineffective. Williamson has attacked him and punished all the short deliveries to cause numerous problems for the bowler. 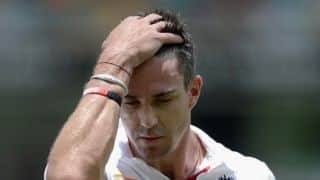