India fought back on the second day of the first Test with the wickets of Corey Anderson and BJ Watling in the first Test at Auckland on Friday. New Zealand are on 433 for six with Brendon McCullum still unbeaten on 181. Tim Southee is playing a cameo with 28 from 20 balls.

Anderson was out leg-before for 77. Indian pacers were ineffective at the start with the pair scoring aggressively with 65 coming off the first 10 overs of the day. Anderson was unlucky be given out leg-before to Ishant as the replays showed the ball was travelling over the stumps.

McCullum though scored at a brisk rate. The Kiwis lost the wicket of BJ Watling soon caught by Shikhar Dhawan in the slips for just one.

New Zealand crossed the 400-run mark with a boundary by Tim Southee. Southee faced some chin music with short balls from Ishant but managed to hook one for a six. 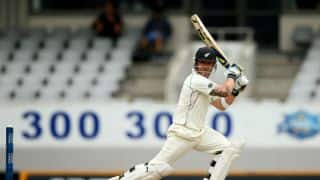