India have been pushed on the backfoot losing three quick wickets in reply to New Zealand’s 503 on Day Two of the first Test at Auckland on Friday. Shikhar Dhawan and Cheteshwar Pujara were dismissed in the first over of the innings by Trent Boult. Virat Kohli soon followed dismissed by Tim Southee. India are 15 for three after eight overs.

Dhawan offered a poor shot on the third ball and was caught in the gully by Kane Williamson for a duck. The big blow for India came few balls later when batting mainstay Pujara tried to go after a wide one from Boult and was caught in the slips. It was a disappointing shot from Pujara who is known to be patient and not fiddle with balls pitched well outside off.

The Indian batsmen were tested by Boult and Southee. Another breakthrough came in the sixth over, when a short ball from Southee took a feather touch off his glove before deflecting towards the slips off his helmet. Kohli was disappointed at being given out.

Earlier, New Zealand were bowled out for 503 losing three wickets in the second session with skipper Brendon McCullum  scoring 224. 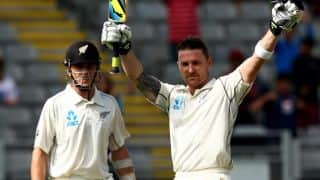 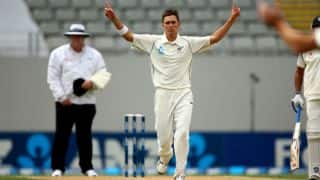