New Zealand lost Jesse Ryder in the fourth over as they are 22 for one. Mohammed Shami beat Ryder as he missed the ball completely for want of footwork.

Bhuvneshwar Kumar bowled the first over and had hit the right areas. However, off the last delivery, Ryder merely flicked it and it sailed over the square-leg boundary for a maximum.

Shami then started the second over and was flicked by Ryder through fine-leg for a four.

The next ball was bludgeoned for a four through extra-cover and it pierced the gap before the fielders could move.

Two overs later, Shami was again, half-pulled and half carted through the leg side for four, before Ryder was bowled by Shami. 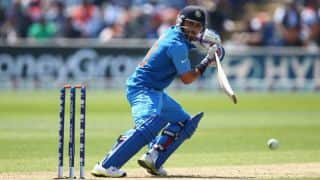