New Zealand scored at over five runs an over to reach in the second One-Day International (ODI) at Hamilton against India on Wednesday. Martin Guptill is batting on 28, Kane Williamson is on 20. New Zealand are 70 for one after 13 overs.

The right-handed opener Guptill is struggling to time the ball. In the first powerplay of 10 overs, Guptill faced 25 dot deliveries.

However, the Kiwis didn’t have much trouble in their scoring rate as Williamson scored briskly and hit three boundaries early and rotated the strike frequently picking up the singles and twos.

Williamson arrived at the crease after the dismissal of Jesse Ryder for 20. Ryder looked in good touch striking the ball perfectly but failed to judge the bounce of a short ball and went for an upper cut but edged the ball to keeper MS Dhoni. 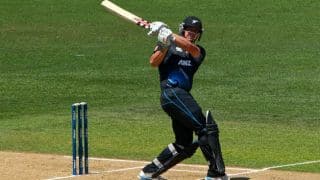