Rohit was happy to see that his team improved on the mistakes they made in their record 80-run defeat in the series opener.

Stand-in captain Rohit Sharma waxed eloquent on his side s bowling performance after India bounced back from their record 80-run defeat in the series opener to thrash New Zealand by seven wickets in the second of the three-match T20 Internationals in Auckland on Friday.

Set with the modest 159-run target that was never going to be enough considering the small dimensions at Eden Park, Rohit, who registered single-digit scores in his previous three appearances (two ODIs and one T20I) finally found his mojo. He smashed three boundaries and four sixes to bring up his half-century in just 29 balls and in the bargain became the highest run-scorer in T20I history as India romped home with seven balls to spare. (ALSO READ: Umpires under scanner after Daryl Mitchell given lbw despite inside edge and DRS)

Opting to bat, the Kiwis were reduced to 50/4 in the eighth over with Krunal Pandya picking up three wickets of Colin Munro (12), Daryl Mitchell (1) and skipper Kane Williamson (20). Bhuvneshwar Kumar pocketed the first wicket in Tim Seifert, who top scored with 80 in the first match at Wellington.

Very pleased to see how we bowled, and we were quite clinical with the bat as well. We have quality in our side, but we executed our plans better today, after learning from our mistakes. It’s important to understand the mistakes that we made – it’s been a long tour for everyone. So, we didn’t want to put a lot of pressure on the boys, just go in there with a clear mind, Rohit said at the post-match presentation ceremony. (ALSO READ: Rohit Sharma becomes highest run-getter in T20Is)

The series decider will be on Sunday at the Seddon Park in Hamilton. It’s going to be a cracker of a game in the 3rd T20I, but nothing to take away from New Zealand, they’re still a quality side, Rohit said. 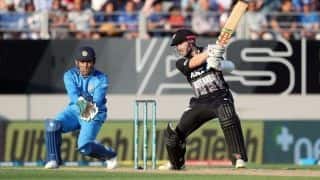