Known for their loud cheers and Bhangra whenever the Indian team plays at the Feroz Shah Kotla stadium, the Delhi crowd went into a hush when home boy Virat Kohli was unexpectedly dismissed.

New Delhi: Known for their loud cheers and Bhangra whenever the Indian team plays at the Feroz Shah Kotla stadium, the Delhi crowd went into a hush when home boy Virat Kohli was unexpectedly dismissed for a rare single-digit score but expressed delight that the second One-Day International (ODI) between India and New Zealand turned out to be nail-biting. Kohli’s failure at the Kotla in the second One Day International dampened the mood of the spectators, who wanted their local hero to score a century during India’s chase, with some even started returning home with his dismissal. Full Cricket Scorecard, India vs New Zealand, 2nd ODI

“We were here to watch a (Virat) Kohli innings… but somehow it wasn’t his day… just hope the others will take our team through,” said Ritesh, who along with his friends were on their way back home just after Kohli’s dismissal in the 12th over of India’s innings. “He top scored in the first match at Dharamsala… and today, it was just an unlucky day… wish it didn’t happen in Delhi… but whoever bats must take India over the line,” another cricket buff said. The usually vocal Kotla crowd went silent once Kohli was caught behind by Luke Ronchi followed by the quick dismissals of Ajinkya Rahane and Manish Pandey.

But with Mahendra Singh Dhoni walking into the middle, the Delhi crowd were on their feet again with the hopes that Captain cool one of the world’s best finishers will take India over the line. The Ranchi stumper didn’t disappoint and along with Kedar Jadhav brought up a 66-run fifth wicket stand before the pair parted ways. Despite Hardik Pandya lifting the spirits with some late order heroics, the hosts fell short by six runs in the second match. Irrespective of the outcome of the match, some fans were seen dancing to the tunes of various popular Bollywood numbers. Some even were delighted at the match going down to the wire rather than being a dull one-sided affair. READ: MS Dhoni: Wanted to bat up and play a few more stroke vs NZ in 2nd ODI

“I am happy that finally New Zealand showed they are capable of winning… this is their first win in the series… they were the better team on the day… we will win the series though,” college student Raman, who came with his friends, said. 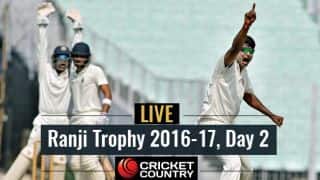