India will play the 2nd ODI against New Zealand in Pune on October 25.

Pune: New Zealand wicketkeeper-batsman Tom Latham, who scored an unbeaten century in the team’s surprise win over India, prefers playing the sweep shot against the spinners rather than hitting them down the ground. At the Wankhede Stadium on Sunday, left-handed Latham relied on sweeps and reverse-sweeps to overcome the challenge posed by the Indian spin duo of Yuzvendra Chahal and Kuldeep Yadav.”Everybody is different in the way they play spin in different conditions. I think the Indians play the different way, they are used to these conditions and they have got their game,” said Latham.

“One thing that comes to me is sweep that I have played throughout my career. It s something that I find easier to play than hitting down the ground.” The southpaw, who was among the runs when the Kiwis toured India last year, was speaking to reporters on the eve of the second ODI. “The other guys may find hitting down the ground easier. It’s important to have different game plans for different conditions and try and stick to that,” the 25-year-old said. Latham paid heed to the advice by senior pro Ross Taylor who asked him to use sweep and reverse sweep to disturb the length of Yadav and Chahal.

The middle-order batsman has been in good run since coming to India, scoring a half century and a ton in the warm up games and following up with a century in the first ODI.”I am not too sure (about the secret to success). We had a lot of preparation back home, coming out of the winter, when we come to India, it is obviously massive focus on spin and we lucky enough to be here last year, so we knew a little bit how India played and watching them against the Australian team, so lot of work in terms of spin and playing in the middle. “I put little bit of work in terms of coming over here and playing spin. On surfaces back home they were a little bit drier and quite responsive to spin. So, that was (a part) of the preparation,” he said.

The Kiwis are on the cusp of winning their first series in India and Latham feels that they have a chance to do that.”It was obviously pleasing to make a contribution and be there till the end (in Mumbai). The partnership which me and Ross (Taylor) put on was vital for that and Ross played very well and deserves credit. It was nice to keep the communication lines going. We have got one more game starting tomorrow, and if we play some good cricket then hopefully we would give us a chance of winning the series,” he said.

Latham, who is a specialist opener, has moved down the order to five. He said he is pretty familiar with his current batting spot.”No, not really. (Not difficult to adapt to the batting order). It was nice to have those two warm-up games beforehand; and contribute in those games and start against spin. I have played in that position (No 5) before when I started playing for New Zealand.”

“So, it’s not a position which is unfamiliar to me. It was more of a tactical shift than anything. Coming in the middle when the ball is little bit softer and playing a bit more spin. It is nice that I adapted quickly,” he added. 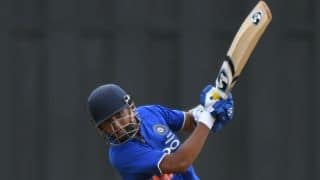