India will look to make amends after a disappointing loss in first ODI.

India will look to make amends after a disappointing loss in the first One-Day International (ODI) to hosts New Zealand, when they clash in the second game of the five-match series at Hamilton on Wednesday.

Napier was as good a batting pitch on which India could get to start an overseas One-Day International series. And the weather too wasn’t harsh to make them shiver while facing the swing bowlers. Yet, India squandered three opportunities to lose the first game of the five-match series.

The bowlers as usual let New Zealand off the hook in the middle-overs, the openers faltered in giving a good start and when the platform was set for a killer punch by Virat Kohli and MS Dhoni, wickets fell in a heap and New Zealand romped home with a 24-run win.

Things will only get tough  for Dhoni and co, who will have to battle not just a slightly tricky pitch but the inconsistency of his own players as well. The only inspiration would be the way Kohli batted. Not so long ago, the top order looked in sublime touch like the Indian No 3. For the batsman who played in New Zealand for the first time ever, the others too can lift their game up and get back in the groove.

While India ponder over fighting as a team, the opposite camp will be jumping with joy having executed all their plans to perfection. The key players were in the thick of action and stuck together. The big boy Corey Anderson too lived up to the hype by virtually inflicting more psychological damage on the Indian bowlers smashing them for four gigantic sixes, two of which led to replacing the ball. Barring Kohli and Dhoni, none of the batsmen were comfortable against the pacers. Even Nathan McCullum managed to tie them down which just added to the pressure. The turning point of the first match was the last spell of Mitchell McClenaghan, who attacked and did it to perfection bagging three wickets, and four overall in the match.

In terms of the team combination, New Zealand would have loved to continue with the same playing XI but the injury to pacer Adam Milne will force them to include Kyle Mills, who was rested from the first match. As a cover-up for Milne, right-arm pacer Hamish Bennett has been included in the squad. Milne suffered a side strain during the match at Napier. The pacer who bowled at full throttle consistently in his spells had the Indian batsmen in some discomfort when touching the 150kph mark frequently.

For the Indian team though, it will be interesting to see what lies in store. Dhoni is known to back his players but the patience over Ishant Sharma’s inconsistency might get the better of him. Both Varun Aaron and Ishwar Pandey will be yearning for that place as the third pacer. The only good aspect of India’s bowling was the accuracy of Mohammed Shami and Bhuvneshwar Kumar. Both were guilty of conceding some length balls for Anderson to flex his muscles but in the death overs kept it full and straight.

India and New Zealand have played thrice on this ground. Twice the Kiwis won the match (in 1981 and 2003) and the last time they played in 2009, Virender Sehwag and Gautam Gambhir ripped apart the New Zealand bowling to register a 10-wicket win. The Indians can go in to this match expecting a green top, and as much as the New Zealand pacers will be looking to exploit the conditions.

The Indian pacers too will be focused to rise up to the occasion. 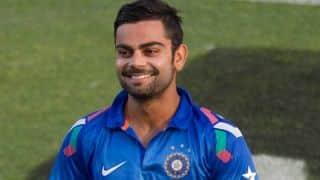