India lost Rohit Sharma off the first ball of the eighth over with the score on 21.

Rohit Sharma has been dismissed for a 27-ball 15 in their pursuit of their target of 243 in the second One-Day International (ODI) against New Zealand at the Feroz Shah Kotla, Delhi. Rohit edged the ball to the wicketkeeper, giving Trent Boult his first wicket of the match. As soon as Rohit hit the ball, he held his left hand in discomfort as he walked off the field. India just had 7 from their first 4 overs, which included a maiden from Boult. But Rohit took on Matt Henry in the next over, dispatching him for a six straight over his head. Rahane then hit the final ball off that over to the fence, fetching India 11 off that over. Boult once again did not give away any runs in his very next over. Live Cricket Scorecard: India vs New Zealand 2nd ODI at Delhi

India have never chased down a total this big at Delhi in a day-night match. The highest they have chased down was 238. If they do chase this target down this will be a record run chase on this ground. India still have the likes of Virat Kohli, MS Dhoni, Manish Pandey and Kedar Jadhav to come. If the top three can set a good platform for the middle-order, there is no reason as to why India cannot chase this total down. Earlier, India had won the toss and elected to field. India did not make a single change from the first ODI. New Zealand however, made three changes to their line-up. New Zealand brought in Boult, Henry and Anton Devcich. As a result, Doug Bracewell, Jimmy Neesham and leg-spinner Ish Sodhi miss out.

India lead the four-match series 1-0 after completing a six-wicket win in the first ODI at Dharamasala. 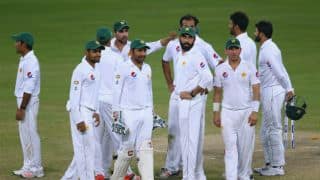