Heading into the second ODI at Eden Park, Auckland on Saturday, India will most likely have a change in personnel, at least in the bowling department India vs New Zealand, 2nd ODI Prediction, Playing XI: Despite posting a mammoth total of 347 in the 1st ODI against New Zealand at Seddon Park, Hamilton on Wednesday, India failed to defend losing by six wickets. While the NZ win has livened up the tour with the hosts claiming their first win of the series, after being whitewashed 0-5, the ODI series – comprising three matches – is one the line now and India can’t afford to have the kind of bad day they had on the field and with the ball. Heading into the second ODI at Eden Park, Auckland on Saturday, India will most likely have a change in personnel, at least in the bowling department.

Here’s our predicted XI for India for the 2nd ODI:

The debutant Agarwal played some glorious shots in his knock of 32 off 31 balls and even though he did not capitalise on the good start and got out at the wrong time, India did end up with 348, so one can’t blame the loss on the openers, for not making substantial scores. Agarwal did his job, so did the other debutant Prithvi Shaw and they will be persisted with for the 2nd ODI.

Similar to Agarwal, Shaw looked good in the middle for his score 20 off 21, but such is the expectation from the young talent that the score in which he got out does not do any justice. Having said that, him not making the most of his start can’t be said as the reason for the loss. He will be playing the second ODI, but nothing less than a 50 is going to satisfy the fans and the team management.

63 off 51 balls. The skipper did his job, what’s more, to say here. He got out to leg spinner Ish Sodhi off the first delivery he faced and Kohli will look to rectify that and build on his start. Again, for the third time – Kohli not making a century, cannot be blamed as the reason for the loss.

103 off 107, his maiden international ton and Iyer too did his job. He was slow to start, had three lives, but picked up the pace and despite losing well-set and senior batsman Kohli, he did not get bogged down, on the contrary, took the attack to the New Zealanders.

In the form of his life, KL Rahul cannot do anything wrong. He was tidy behind the stumps and looks set for this role for this series and probably in the near future as well in ODIs.

Jadhav made his presence felt with 26 off 15 balls and coming in to bat with only five overs to go, Jadhav did what he was supposed to do. He also had two catches to his name and was fairly neat while fielding. Can’t see team management replacing Jadhav – and with whom will they do that? – Shivam Dube to have that extra bowling option or Rishabh Pant for better firepower down the order – highly unlikely.

Jadeja sent down 10 overs, conceding 64 runs – that’s a very high economy-rate – something Jadeja does not go for often. However, he was the most economical among Indian bowlers. He is also the best fielder on either side – even though he was sloppy – but can’t see him being replaced.

Yuzvendra Chahal in place of Kuldeep Yadav is a foreseeable change that India could make. Kuldeep went for 84 runs in the 1st ODI with the likes of Tom Latham and Ross Taylor utilising the sweep against the legspinner to good measure. Kuldeep was slower through the air, giving NZ batsmen enough time to go down on one knee and place the ball. Chahal will be a bit more pacy and uses the change of pace to good effect. So Chahal could be tried in place of an off-colour Kuldeep.

Even though he went for runs there is no reason to believe India will replace Shami.

Shardul Thakur out, Saini in- better bowler – as simple as that. Let’s face it, Thakur is being given opportunities to prove himself. Ultimately, it is Navdeep Saini who will be prefered over Thakur any day. And this is a crunch game with series on the line, so Saini will most likely replace Thakur. But that would mean India’s batting – lower-order – will be weakened. Thakur’s a better bat than Saini. And if India think they need to reinforce their batting, you could see Dube come in for either Jadhav or Jadeja. It will be interesting.

Bumrah is Bumrah, India’s lead bowler. He will play, period. 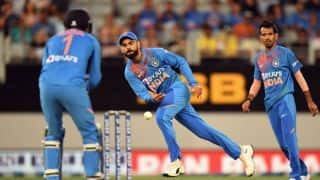