Both Wriddhiman Saha and Rohit Sharma batted excellently throughout the day by adding 103-runs between them.

Day 3 of the second Test began with New Zealand at the score of 128 for 7. They were expected to get all out soon but Jeetan Patel s 47-run knock delayed it as New Zealand managed post the total of above 200. The visiting side were all out for 204 and giving India a strong lead of 112 runs. When India came to bat, Kiwi pacers Trent Boult and Matt Henry bowled excellently sent top four Indian batsman back to pavilion at the score of 43. There was a bit uneven bounce in the pitch and swing, which was favouring Kiwi pacers.

Opener Shikhar Dhawan got hurt while playing few short deliveries of Boult as it bounced a bit more than it was expected. After those four wickets, which included both the Indian openers along with Cheteshwar Pujara and vice-captain Ajinkya Rahane. Further, skipper Virat Kohli and Rohit Sharma build a crucial partnership of 48-run but a short delivery from Boult, which kept low, got Indian captains wicket. After that, Ravichandran Ashwin joined Rohit but he too got out soon and then Wriddhiman Saha entered the crease. Both Saha and Rohit batted excellently throughout the day by adding 103-runs between them.

Later, Rohit got out after scoring 82 followed by Ravindra Jadeja s wicket as well. Rohit s 82-run knock once again made him trend on social media and we present some of the tweets from there.

Haters be like: Rohit sharma played selfish knock and secured his place in the team for next test :3 -_- #INDvNZ

Best test knock till date for #Rohit Sharma Mixture of Composure and Agression This is what no.6 needs Top knock #Hitman#indvsnz #indvnz shanif (@shanif2010) October 2, 2016

That knock by @ImRo45 is what you watch test cricket for! Simply priceless in the context of this test. India are in total control. #INDvNZ Shuvra Bhaumik (@Shuvra_SRKian) October 2, 2016

Jaddu too desperate to score! after hitting a Six tries for another in No time! Hands over his Wicket easily Today! #INDvNZ

Rohit Sharma: Every time I get an opportunity, I try to enjoy and not think about what is happening outside#INDvNZ

At the end of Day 3, Saha remained unbeaten at the score of 39 with Bhuvneshwar Kumar at 8. India will resume their batting on Day 4 of the match with the score of 227 for 9 and lead of 339 runs. 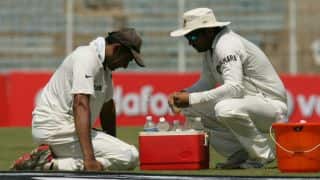 Thanks to Virender Sehwag, Anil Kumble could not score his 2nd Test hundred