India lead New Zealand by 172 runs on Day Two of the second Test.

MS Dhoni was dismissed for 68 off 86 deliveries in India‘s first innings of the second Test against New Zealand in Wellington on February 15, 2014. He gloved a short delivery from Trent Boult to wicketkeeper BJ Watling. India are at 364 for seven after 94 overs in the third session on Day Two.

Boult bowled the delivery down the leg side and Dhoni tried to flick it away towards fine-leg, but only gloved it behind. Dhoni had scored his 29th half-century in Test cricket earlier in the session.

Ajinkya Rahane is batting on 85 and Ravindra Jadeja is on 10. Rahane and Dhoni added 120 runs off 145 deliveries for the seventh wicket. India have taken their lead to 172 runs over New Zealand. 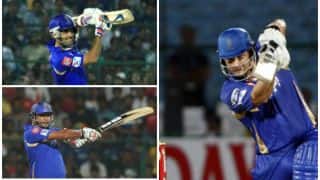