India are at 171 for five in their first innings of the second Test against New Zealand.

Rohit Sharma was dismissed for a duck in India‘s first innings of the second Test against New Zealand in Wellington on February 15, 2014. He dragged a full and wide delivery from James Neesham onto the stumps. After 50 overs, India are at 183 for five.

India have three wickets on Day Two after beginning the day on 100 for two. They trail New Zealand by nine runs. Ishant Sharma was the first wicket to go on Day Two for 26. He was dismissed by Trent Boult.

Shikhar Dhawan looked good for a century, but was dismissed by Tim Southee for 98 off 127 deliveries. He struck 14 fours and one six in his innings. Rohit was the next to follow after facing only three deliveries.

Rohit was Neesham’s first wicket in Test cricket as he is making his debut. Virat Kohli is batting on 22 and Ajinkya Rahane is on nine. 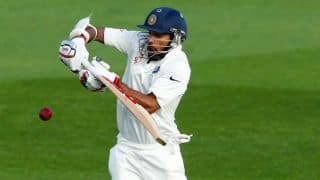