New Zealand are at 84 for three in their second innings. They trail India by 162 runs.

New Zealand are at 84 for three after 32 overs in their second innings of the second Test against India. Tom Latham is batting on 27 and Brendon McCullum is on 13 on Day Three in Wellington on February 16, 2014. They trail India by 162 runs.

Zaheer Khan had taken two early wickets on Day Three to give India a great start. He dismissed Kane Williamson for seven and Hamish Rutherford for 35. On both occasions, the batsmen edged Zaheer’s length deliveries to MS Dhoni behind the wickets.

Virat Kohli then missed a chance to instill further damage on New Zealand. Mohammed Shami’s length delivery had just stopped a bit and McCullum hit the ball in the air. Kohli was positioned at short mid-on and got to the ball with his left hand, but dropped the catch. 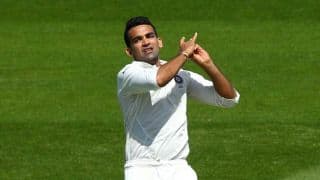 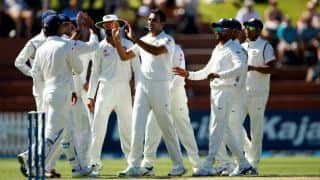