India finished the match on day four and took unbeatable lead in the three-match series as well as got back the No. 1 Test ranking.

Pace and reverse swing, and not spin, proved to be New Zealand s nemesis in the second Test at Kolkata as the visitors crumbled under the pressure of chasing a mammoth 376 against India on the fourth day of the match and lost it by 178 runs. Though their openers got the team off to a decent start by putting up a fifty-run opening stand, India clawed back into the game once the ball got older, with Mohammed Shami putting up a fantastic display of reverse swing. The Kiwi batsmen struggled against him as he polished off the middle and lower order after Ravichandran Ashwin had scalped three out of top four. Bhuvneshwar Kumar and Ravindra Jadeja played their part as well as India won the match and took an unassailable lead of 2-0 in the series. India also became the No. 1 Test team in ICC Rankings in the process. FULL CRICKET SCORECARD: India vs New Zealand, 2nd Test at Eden Gardens, Kolkata

When we talk about Test cricket in India, there s this perennial question of whether the match will last for five days? The simple reason behind this question is low and slow playing surfaces in the Indian subcontinent, which do not last all five days and assist spin bowling big time. And with the visiting teams from outside the Indian subcontinent not at all comfortable against spin bowling, it becomes a commonplace thing for the Tests to get over mostly inside five days. Something on similar lines happened in the Kolkata Tests as well, with a slight change in the script.

It was Indian pacers, especially Shami, who did most of the damage and put India in the driving seat. Shami in particular was unplayable with the old ball generating decent amount of reverse swing. But the procession of wickets was started by Ashwin, who got the well set Tom Latham caught behind at the hands of Wriddhiman Saha. Latham played a fantastic hand, scoring 74 and battling hard to save the day for the Kiwis. But his hard work and concentration was undone by Ashwin, who force him to make the error, by inviting with a floating delivery outside off stump.

Ashwin got to get the credit here, as there was virtually nothing for him in the pitch. But he bowled his heart out and got vital wickets on an unresponsive deck, something which will hold him in good stead as the long home season progresses.

From here on, for the next hour or so, it was all Shami show, as the local boy made the ball do all the talking with his reverse swing. He was at his lethal best post tea, as he first removed Mitchell Santner, who had proved his ability of handling spin well in India thus far, but had no clue against Shami. Bowling from around the wicket, Shami angled in a delivery at a good pace. He was making good use of the crease and was bowling a bit wide from it. The ball came in sharply to hit his pads and umpire Richard Kettleborough had no hesitation raising his finger.

Then came BJ Watling, who looked completely clueless against Shami from the beginning. The Bengal pacer unleashed his weapon of reverse swing on him and Watling did not last long, as his off stump was knocked out of the ground.

After the Shami strikes, skipper Virat Kohli brought in Ravindra Jadeja, thus giving much needed break to the pacer. Jadeja responded brilliantly by removing Luke Ronchi for 32. Bhuvneshwar, who was introduced soon after, sent back Jeetan Patel, thus leaving only the formalities to be done. Jadeja and Shami, who returned with the new ball, completed the formalities to complete India’s win in the historic match.

No takers for Test cricket?

Eden Gardens once had a seating capacity of 1,00,000. The renovation, done keeping the requirements of ICC for hosting World Cup 2011 games in mind, reduced the capacity to 66,000. However, there was no reduction in the passion for cricket in the city of Kolkata. But in India s historic 250th Test at home being played in the city, there were just over 12,000 spectators to see India play on day four. The BCCI has tried a variety of combinations to bring crowd to the stadium; playing pink ball cricket and bringing Test cricket to smaller venues were few of them. Whether or not these experiments work, time will tell. But for the meantime, Kolkata crowd did disappoint a bit.

Skipper Kohli did enough to bring the spectators alive by occasionally asking them through his hand gestures to make some noise, especially when Shami was bowling. Hopefully, in the third Test at Indore, city s first, there will be significant turn out.

New Zealand must have hoped to somehow delay the inevitable by dragging the match to the fifth day. But Indian bowlers did not give them this chance as India finished the match on day four and took unbeatable lead in the three-match series as well as got back the No. 1 Test ranking. Pakistan were the No. 1 Test team in ICC Rankings till now. But a clinical India have taken back the position from their arch rivals.

And it has been a team effort on the whole, barring a few headaches. One of their openers in amongst the runs, their No. 3 has looked solid, middle-order has stepped up whenever the need has arose, wicket-keeper batsman has got fifties in both the innings of this match, the spinners have hunted in pair and the pacers too have bowled as a unit with same intensity. Kohli, who has had a dry run of late, showed glimpses of getting back to form with 45 in the second innings. The other problem area of second opener, which has been a concern since KL Rahul‘s injury, might see a new occupant in Gautam Gambhir when action moves to Indore for the third Test from October 8.

Meanwhile, Wriddhiman Saha was rightly adjudged the Man of the Match for his twin fifties in the game.

(A self-confessed cricket freak, Chinmay Jawalekar is a senior writer with CricketCountry. When not writing or following cricket, he loves to read, eat and sleep. He can be followed @CricfreakTweets) 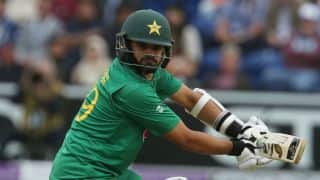