Openers Tom Latham and Martin Guptill helped New Zealand reach 55 for no loss at lunch in pursuit of a daunting 376-run target against India.

India struck early in the second session of the fourth day s play in the second Test against New Zealand. India s ace bowler Ravichandran Ashwin trapped New Zealand opener Martin Guptill for 24, in the first over in the second session. Guptill, who had already survived an appeal for caught at short-leg, could not present his bat to a delivery pitched very full to him by Ashwin, as he leant forward to defend it. However, the ball spun into the right-hander after pitching outside off, and hit his front pat in the line of the off-stump. Guptill made 24 runs off 49 balls. LIVE CRICKET SCORECARD: India vs New Zealand 2nd Test at Kolkata, Day 4

Guptill fell without adding any run to his first-wicket stand with Tom Latham, after the two resumed at 55 for no loss into the second session. Actually, the lanky batsman was dismissed on the fifth ball since the play resumed into the second session. The left-handed batsman Henry Nicholls walked out to bat for the New Zealand team after they lost their first wicket. New Zealand made a strong start to their chase of 376, as they did not lose any wicket in the first session of the fourth day s play. This was after India were bowled out for 263, with Wriddhiman Saha slamming his second half-century of the Test. Saha was unbeaten on 58, which came off 120 balls and 6 boundaries. This was the fourth half-century for the Indian wicketkeeper-batsman, who has been rediscovering himself as a batsman since the tour of the West Indies. LIVE Cricket Score, IND Vs NZ, 2nd Test 2016, Day 4

Openers Tom Latham and Martin Guptill helped New Zealand reach 55 for no loss at lunch in pursuit of a daunting 376-run target against India on the fourth day of the second Test in Kolkata Monday. Latham on 31 and Guptill on 21 were battling to save the three-match series, which they trail 1-0 after losing the opening match in Kanpur. Earlier India, who resumed the day on 227 for eight in their second innings, were bowled out 263 with Wriddhiman Saha scoring an unbeaten 58, AFP reported.

Saha tackled the New Zealand seamers with assurance after Rohit Sharma struck a dominant 82 on Sunday to hand India the advantage. Trent Boult, Matt Henry and Mitchell Santner claimed three wickets each but the visitors suffered after conceding a 112-run lead in their first innings. Indian seamers Bhuvneshwar Kumar and Mohammed Shami, who shared eight wickets between them in the first innings, also made full use of the seemingly two-paced Eden Gardens wicket. India skipper Virat Kohli though went back to his spin twins Ravichandran Ashwin and Ravindra Jadeja after the pace duo went wicketless in their respective first spells in the morning session on Monday. 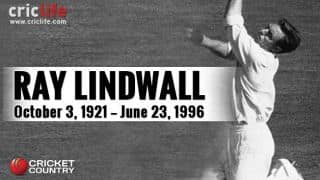 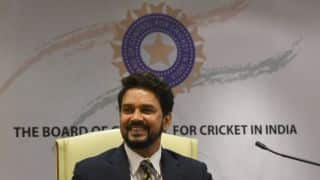