New Zealand opener Tom Latham struck form again, as he completed his half-century in their second innings, during the fourth day of the second Test against India at Kolkata.

New Zealand opener Tom Latham struck form again, as he completed his half-century in their second innings, during the fourth day of the second Test against India at Kolkata. Chasing 376 to win, the New Zealand opener provided his team a strong start. But soon after Latham got to his half-century, Ravindra Jadeja provided India the much-needed breakthrough as he had Henry Nicholls caught at first slip in the 36th over. New Zealand need another 272 runs to win the second Test and come at the level terms with the Indian cricket team. Latham, who opened the innings with Martin Guptill, completed his ninth half-century in Test cricket as the New Zealand cricket team continued to surprise the Indians with their gritty batting and perfect application. LIVE CRICKET SCORECARD: India vs New Zealand 2nd Test at Kolkata, Day 4

New Zealand were 97 for 1 when drinks was taken in the second session of the fourth day. Latham was batting on 51 off 90 balls, with the help of 6 boundaries. On the other hand, left-handed batsman Henry Nicholls, who had a forgettable outing in the first innings, dug in to reach 24 off 66 balls, hitting two boundaries in the process. Latham and Nicholls added 49 runs for the second wicket, putting New Zealand in a commanding position and also creating a lot of worries for the Indians who have looked ordinary with the ball so far in their second innings. India, on their part, now need wickets in a flurry or else the Kiwis will keep knocking off runs from their total, which was not even 400 on this wicket which may continue to assist the spinners. India will need their fast bowlers to come to the party. LIVE Cricket Score, IND Vs NZ, 2nd Test 2016, Day 4

Earlier in the day, openers Tom Latham and Martin Guptill helped New Zealand reach 55 for no loss at lunch in pursuit of a daunting 376-run target against India on the fourth day of the second Test in Kolkata Monday. Latham on 31 and Guptill on 21 were battling to save the three-match series, which they trail 1-0 after losing the opening match in Kanpur. Earlier India, who resumed the day on 227 for eight in their second innings, were bowled out 263 with Wriddhiman Saha scoring an unbeaten 58, AFP reported. 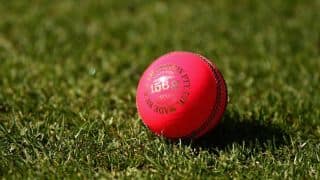 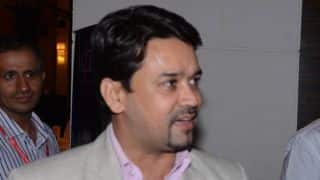 India may pull out of Champions Trophy 2017 if Lodha recommendations are implemented fully, says Anurag Thakur