Resuming their 2nd innings at 227 for 8, Indian innings folded for 263. In a wicket still offering uneven bounce wicketkeeper Wriddhiman Saha and Bhuvneshwar Kumar, two of India's stars in this Test, showed good application with the bat.

Two deliveries missing the stumps by whisker, a wide ball, a half-century, 3 wickets, barrage of short balls, the fourth morning of the Test was not short of any action as India prevailed over New Zealand. It was a brilliant Sunday for cricket fans. India and New Zealand tussled in a gruelling day’s play in the 2nd Test between them at Eden Gardens, Kolkata. There were two other high scoring One-Day International (ODIs). South Africa beat Australia, while Pakistan got the better of West Indies. Coming to the Test, New Zealand dominated the major part of Day Three but it is India, who find themselves at the top. Resuming their 2nd innings at 227 for 8, Indian innings folded for 263. In a wicket still offering uneven bounce wicketkeeper Wriddhiman Saha and Bhuvneshwar Kumar, two of India’s stars in this Test, showed good application with the bat.

Saha scored his second fifty of the game as India set New Zealand a target of 376 for New Zealand. He ended with 58 not out, an innings that consisted 6 boundaries. The uneven bounce which has bothered batsmen in this Test, continue to haunt them. Bhuvi took a few blows on the body as a result. A short one from Neil Wagner ended Bhuvi’s 23-run cameo, bringing an end to the 36-run ninth wicket stand between them.

There were two deliveries this morning that got past the stumps agonisingly without disturbing the bails. Mitchell Santner’s turner missed Saha’s stumps by millimetres while Wagner suffered the same fate against Shami. The Indian No.11 was finally caught off the bowling of Trent Boult in the third slip. Boult, Matt Henry and Santner finished with 3 wickets apiece.

The end of the third day’s play saw Rohit Sharma fall for 82 and in the same over Ravindra Jadeja threw away his wicket trying to be overambitious. The highlight of Indian innings was Rohit Sharma knock and Virat Kohli’s counterattacking 45. With ball moving around and the pitch playing its part with uneven bounce, India were reduced to 43 for 4.

With New Zealand pacers Henry and Boult looking unplayable, Kohli took the attack to the opposition. He attacked and put the pressure back on the New Zealand bowling, forcing Ross Taylor to employ spin bowlers. He was unlucky as the pitch did him with a low bounce. He was trapped leg before off Boult. Kohli is one of the greatest to grace the limited-overs game and his knock had shades of what made him successful in that format.

Rohit’s knock of 82 made all believe that this cricketer can do no wrong at Eden Gardens. The venue where he has been exceptional in Indian Premier League (IPL), registered the world record 264 and scored a hundred on Test debut, came to Rohit’s rescue, as the right-hander is looking to save his Test career. However, he does not reckon so.

Earlier in the innings, Boult enjoyed a riveting rivalry with his Sunrisers Hyderabad (SRH) teammate Shikhar Dhawan, who too has been battling form. Boult, who usually relies on seam movement, banged in hard, making use of the pitch. Using the uneven bounce to his advantage, he struck two blows to Dhawan’s thumb (post his innings he was rushed to hospital to get x-rays done. Dhawan later smacked a couple of quality boundaries but Boult had the last laugh as he got one to nip in to trap the southpaw leg before.

“I was just trying to put the ball in a good area and set-up the team. I enjoyed it and it was very nice to get him out in the end. We have ve been mates now for a couple of years and he is a class player,” said Boult about the contest.

New Zealand have fought well against the Indians and it has not been an easy outing for the host but the conditions have definitely got better of them.

“I have to put these as some of the tougher conditions I have ever played in my career. I am not too sure what it looks like on TV but it is pretty taxing. Obviously the dryness in the wicket and in the air is pretty tough,” Boult summarised it quite aptly.

New Zealand have a herculean task of chasing down 376. You never say ‘impossible’ in cricket but if the visitors get there it will be one of their greatest moments in Test cricket. The fourth innings total at Eden Gardens is 325 for 3. India are in a driving seat. They are sniffing a series win and the No.1 position in the ICC Test rankings. 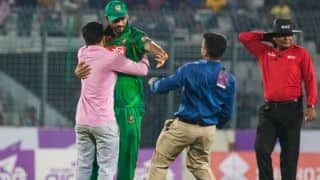