It is amusing that all the hard work done on the cricket field eventually ends up in numbers. And how often have we heard cricketers say that numbers are something they do not care about. Yet there are some who care little about the numeric that follow their name yet continue to notch up phenomenal numbers. Mentioning this along with amusement and statistics, here is one man who never fails to disappoint MS Dhoni. In a move that fans have been anticipating for long, the Indian limited-overs captain promoted himself to No.4 and the result was there to be seen. FULL Cricket Scorecard, India vs New Zealand, 3rd ODI at Mohali

Dhoni stroked a masterful 80 from 91 balls, adding a 151-run stand for the third wicket with his deputy Virat Kohli, who went on to belt an unbeaten 154 off just 134 balls. However it was the partnership that set things up for India, who finished at seven-wicket win at Mohali to go up 2-1 in the five-match One-Day International (ODI) against New Zealand. Kohli could play the way he did with the support from Dhoni at the other end. With Kohli at No. 3 and Dhoni at No. 4 and with Manish Pandey showing traits of a finisher, Indian batting wears a formidable look. While collecting the Man-of-the-Match award, Kohli was quick to admit, Good to have MS up the order. READ: Virat Kohli’s 26th ODI ton, MS Dhoni’s brilliance helps India gain 2-1 lead against New Zealand

It was after more than a year that Dhoni registered a fifty-plus score. Kohli, who usually controls proceedings in the middle, was happy rotating the strike with his captain and looked in a more comfort space with his presence and admitted, We fed off each other and I fed off MS as well.

While Kohli continued to notch up phenomenal numbers, registering his 26th ODI hundred as he went past Kumar Sangakkara s tally of 25. Sachin Tendulkar leads the list with 49 tons, followed by Ricky Ponting at 30 and Sanath Jayasuriya with 28. Tendulkar, Ponting, Jayasuriya and Sangakkara have played 463, 375, 445 and 404 ODIs respectively while astonishingly Kohli has just played 174!

The Mohali ODI marked Dhoni s 281st ODI. In the post-match presentation, Dhoni reasoned out the move behind his walking out at No.3, I have batted lower down for a long time, I think 200 innings down the order. To some extent, I am losing my ability to freely rotate in the middle, so I have decided to bat up and let the others finish. ALSO READ: India vs New Zealand 3rd ODI: Kiwis’ fight, Virat Kohli’s 26th ODI ton, MS Dhoni’s fifty and other highlights

Dhoni s 281st ODI was a special one for him. Not only his 80 contributed massively towards the win but he continued to notch up some unreal numbers.

Though his wicket keeping technique against fast bowlers is questionable but without a doubt, Dhoni is inarguably the best wicketkeeper against spin bowling. He already holds the record of most stumpings in international cricket but at Mohali, he added another feather in the cap.

Leg-spinner Amit Mishra tossed one up to Ross Taylor, who was flummoxed and Dhoni stumped him. The wicket not only triggered the New Zealand batting collapse but also brought up Dhoni s 150th stumping in international cricket.

His fast hands then accounted for the wicket of Luke Ronchi, who too was short of the crease. The first man to 150 international stumpings, Dhoni s tally now reads 151 from 444 matches. He is followed by two prolific Sri Lankans. Sangakkara has 139 from 594 games and Romesh Kaluwitharana has 101 from 238 matches.

A career batting average in excess of 50 makes Dhoni a special cricketer. With the singles coming in full swing and with dots mounting the pressure slightly, Dhoni used the long handle to a good effect and smacked three sixes in his innings. The first six was struck of Mitchell Santner in the 17th over and with that he became only the fifth Indian batsman to enter the 9,000-run ODI club. The other Indian batsmen who have crossed the mark are Mohammad Azharuddin, Sachin Tendulkar, Sourav Ganguly and Rahul Dravid.

Destructive in the start of his career, Tendulkar s six-hitting was all about class, Ganguly s blows were rhythmic, poetry in motion and more of art but Dhoni with his brute force managed to create a niche and yet glamorised this art.

Unlike the typical Dhoni-style hits, this time he presented a straight bat over Jimmy Neesham s head for a maximum to bring up his third six of the day. In doing so, he equalised Ganguly s tally of 189 sixes and has now smacked the joint second-most sixes for India in ODIs.

However, he went on to break Tendulkar s record for most sixes by an Indian in ODIs. He has 196 of them to his name while Tendulkar has 195. Confused? Dhoni has struck seven sixes for Asia XI as well!

In this same innings, Dhoni went on to surpass Ricky Ponting s tally of most sixes as an ODI skipper. Dhoni has now 125 sixes as captain in ODIs, while Ponting has 123.

In the 28th over, Trent Boult bowled a short delivery to Dhoni, which the 35-year-old smacked through the mid-wicket region for a boundary. That brought up his 700th four in ODI cricket.

With 701 boundaries, Dhoni has now struck the sixth most number of fours by an India. Tendulkar expectedly leads the chart with 2016, followed by Virender Sehwag with 1132, Ganguly with 1,122, Dravid with 950 and Yuvraj Singh at 861.

Had Kohli hit another boundary, he could have been the latest entrant to the 700-boundary club. He is stuck at 699.

One match and records at galore for Captain Cool. Keep them coming!

(Suvajit Mustafi consumes cricket for lunch, fiction for dinner and munches numerous other snacks throughout the day. Yes, a jack of several trades, all Suvajit dreamt of was being India s World Cup winning skipper but ended up being a sports writer, author, screenwriter, director, copywriter, graphic designer, sports marketer, strategist, entrepreneur, philosopher and traveller. Donning so many hats, it s cricket, which gives him the ultimate high and where he finds solace. He can be followed at @RibsGully and facebook.com/rivu7) 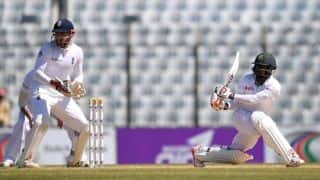 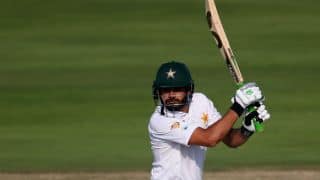