Rahul brought up his 4th ODI hundred in 104 balls as he anchored India's charge in Mount Maunganui after another top-order failure in the series.

KL Rahul continued to make the most of his glorious batting form, piling on runs on the ongoing New Zealand tour with yet another classy knock. In the third and final ODI between India and New Zealand in Mount Maunganui, Rahul smashed his fourth century to become the second Indian wicketkeeper-batsman to register three-figure mark outside Asia. After missing out on the opportunity to complete his ton in Hamilton, Rahul made sure he completed the task at Bay Oval. This was Rahul’s maiden ODI ton in New Zealand.

Before KL, Rahul Dravid was the only Indian wicketkeeper-batsmen to score a century outside Asia. During the 1999 ICC Cricket World Cup, Dravid played a memorable knock of 145 to power India to a mammoth total of 373/6 from their 50 overs. Dravid, along with Sourav Ganguly (183) knitted a massive 318-run stand for the second wicket.

On Tuesday during the 3rd ODI, Rahul played a 112-run knock to guide India to a solid score of 296/7 in 50 overs. Coming in a pressure situation after another top-order failure, the 27-year-old conjured up crucial stands with Shreyas Iyer and Manish Pandey to drive India to a comfortable position. His knock comprised of nine boundaries and two sixes.

After completing his 4th ODI ton, Rahul achieved a couple more feats. He became only the Indian batsman after Suresh Raina to score a hundred while batting at number 5 spot or lower in New Zealand in ODI cricket. Raina scored a century vs Zimbabwe in 2015.

Also, the Mangalore-born batsman became the second-fastest to score four ODI hundreds while representing India. Rahul took 31 innings to score his fourth ton in ODI cricket. Shikhar Dhawan is at the top with just 24 innings to scale the similar feat.

Apart from Rahul, Iyer and Pandey made significant contributions of 62 and 42 to power India to a solid total of 296/7. Hamish Bennett was pick of the New Zealand bowlers as he returned with figures of 4/64 from his 10 overs. 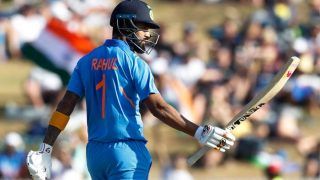 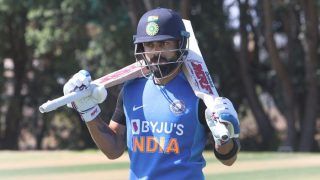