Chasing a total of 297 to win, New Zealand were on cruise control for the majority of the innings and then overcame a flurry of wickets to overhaul the target with allrounder Colin de Grandhomme smashing a 28-ball 58 New Zealand completed a 3-0 whitewash of India by winning the third and the final ODI at Bay Oval, Mount Maunganui by five wickets on Tuesday, thus leaving India winless in a bilateral series of more than one match for the first time since 1989 – when West Indies blanked India 5-0 at home.

Chasing a total of 297 to win, New Zealand were on cruise control for the majority of the innings and then overcame a flurry of wickets to overhaul the target with allrounder Colin de Grandhomme smashing a 28-ball 58 to eventually make light weather of the total.

Martin Guptill, en route to becoming the most prolific New Zealand opener in ODIs surpassing Nathan Astle, had provided the perfect start of the hosts smashing 66 off just 46 balls at the top of the order. The start by capitalised fellow batters with opener Henry Nicholls staying put to add 80 off 103 balls – his second fifty-plus score of the series.

India got a whip of a comeback when New Zealand lost three wickets for just 30 runs in the middle overs, but Tom Lathan’s sensible 32 not out of 34 balls and de Grandhomme’s belligerent hitting – 21-ball fifty – helped New Zealand take the series with 17 balls to spare. Kane Williamson and Jimmy Neesham added 22 and 19 runs, respectively,

For India, it was an unforgettable day for Shardul Thakur, who was tonked for 87 runs in his 9.1 overs, while Navdeep Saini was under the pump, giving away 68 runs in his eight overs. Jasprit Bumrah had an unforgettable series, returning for the first time wicketless. His third ODI figures were 10-0-50-0.

.India were left reeling at 62/3 by the 13th over before Rahul and Iyer steadied the ship with a century stand. Manish Pandey (42 off 48 balls), playing this game in place of Kedar Jadhav, then supported Rahul as the duo also put on a 100 plus stand, but their departures off consecutive balls in the 47th over meant India could not go past the 300-run mark.

Skipper Virat Kohli was out cheaply for just nine, while Mayank Agarwal could only add one run in the match. Prithvi Shaw impressed with a 42-ball 40, but was run-out at the wrong time.

For New Zealand, Hamish Bennett returned 4/64 in his ten overs, while Kyle Jamieson and Neesham added one wicket each. 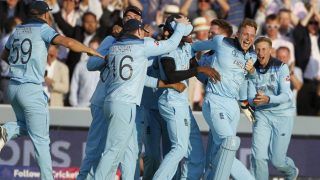