India go into Tea at 148 for 3 against New Zealand on Day 1 of the 3rd Test at Indore's Holkar stadium.

India were 75 for 2 at the start of second session of Day Two, with Cheteshwar Pujara at 25 and Virat Kohli at 7. The match was evenly poised, as both teams put up a disciplined effort in the morning. All the same, it was Gautam Gambhir’s comeback that kept everyone indulged in. Whether he will fail or display his remarkable batsmanship, was a question that left everyone curious. With a slight change in technique, he almost looked a Shivnarine Chanderpaul copy. However, the deft touches took us down memory lane, when he was in his heydays. He, in fact, scored 29 runs laced with 3 fours and two sixes before he was adjudged lbw off Trent Boult. Live cricket scorecard: India vs New Zealand, 3rd Test

In other news, the attendance at Indore’s Holkar Stadium has revived hopes for Test cricket. As many as 18,000 people have come to enjoy the longest format on a warm and sunny Saturday. My colleague Chinmay Jawalekar, present at the venue, said the spectators exhibited Mexican waves, cheering for Team India. In addition, the attendance is 80 per cent. As a result, it would be unfair to say that Test cricket has gone out of sync with those who only follow one-day formats.

Kane Williamson started with spin-pace attack after lunch. James Neesham, who replaced Neil Wagner, persistently bowled outside-off-stump length, not letting the opposition score runs with ease. However, the onus was on the Pujara-Kohli duo to put up a long and tiring partnership.

As a matter of fact, Pujara has been involved in three hundred-plus partnerships this series. In addition, he has been at his elegant best of late, already scoring three half-centuries in the last four innings.

On the other hand, Kohli has not scored a fifty in his last eight innings. His last 50-plus score was his double-hundred in West Indies. Also read: SC rejects plea asking to overrule ban imposed on CSK

7 overs after lunch, and India were yet to score the first boundary of the session. New Zealand, yet again, displayed a disciplined bowling attack. A wicket was around the corner, it seemed. Pressure was being mounted on India.

Pujara, while trying to defend Mitchell Santner’s wily ball, missed it completely to see his off stump flying in the air. It was the same-old mode of dismissal. Pujara stuck in his crease, and before he realised he missed the line of the ball, he was dismissed. His hesitation to make use of the crease once again cost him his wicket. Yet again, Indian middle order was yet again under fire.

So far, no Indian batsman has scored a century this series. And the way Indian batsmen have been throwing away their starts, a hundred is unlikely to happen. All the same, during South Africa’s tour to India last year, it was Ajinkya Rahane who broke the jinx (pun intended) in the last Test and scored consecutive centuries at Delhi. Also read: PM Modi applauds Kohli for taking part in Swachh Bharat Abhiyan

Meanwhile, the Mumbaikar reached 2,000 Test runs with a flick on the leg-side.

What commendable was, the duo waited for a lose delivery to score boundaries. They knew the importance of keeping wickets intact. One more wicket, and India would have been pushed to further problem.

New Zealand spinners got more drift as the ball got older. However, Kohli made sure he keeps the scoreboard ticking. He played two classic pull-shots off Santner and Henry.

Amidst all the cricketing action, the Indore crowd was at its entertaining best. As the dark clouds loomed over the ground, the spectators used the flash light in their phones and cheered for their team.

All in all, the match is evenly poised at this stage. And this is what Test cricket is all about. 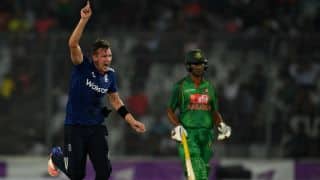 Bangladesh vs England 2016: Jake Ball says, it was a dream debut 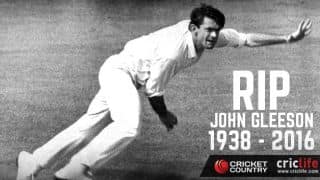