Ravichandran Ashwin's 6-for puts India in the driver's seat on Day 3 of the 3rd Test against New Zealand at Indore's Holkar Stadium.

Virat Kohli goes for the kill. He takes no half measure. Dominance is often on his mind. He plays for win; draw is never an option for him. As a matter of fact, India have never whitewashed New Zealand in a three-Test series. With New Zealand bundled out for 299 in the first innings, India are likely to pull off a victory, leading by 276 runs. India have not lost a Test series ever since Kohli was placed at the helm. They beat Sri Lanka and West Indies in their own den. They have already won the ongoing series 2-0. Plus, South Africa were reduced to nothingness on India’s rank-turners, edging them out by 3-0. Live cricket scorecard: India vs New Zealand, 3rd Test

India won the toss and chose to bat first. Gautam Gambhir and Umesh Yadav replaced the injured Shikhar Dhawan and Bhuvneshwar Kumar. Indore’s Holkar Stadium was hosting its first ever Test match. The crowd came in great numbers and cheered for their team. The first day saw 18,000 people attending the contest, while the next day’s attendance read 22,000. The chants of ‘Sachin Sachin’ echoed the iconic stadium, a proof that Indians are still not over the legendary cricketer. All the same, the crowd cheered for Gambhir, who made his comeback after 2 years, when he walked in with Murali Vijay.

He scored a promising 29-run knock. However, India were 100 for 3, with Kohli and Ajinkya Rahane at the crease. The duo recorded highest partnership for the fourth wicket, adding 365 runs.

Indian middle order were greatly criticised for their dismal performance. At crease were Kohli and Rahane. The onus of quashing the critics was on them. And they did it style, surpassing the preview highest partnership of 353 runs between Sachin Tendulkar and VVS Laxman. Also read: Ajinkya Rahane and the art of playing decisive knocks

Kohli scored his second double-ton, becoming the only Indian captain to do so. In addition, his 211 is the third highest score by an Indian captain, after MS Dhoni’s 224 and Tendulkar’s 217.

On the other hand, Rahane registered his career best: 188. In fact, this was his maiden 150-plus score, and all in all his 8th Test ton. However, there’s more to it than it seems. In the process of scaling up the run-rate, he selflessly threw his wicket and fell short of his maiden double-ton by 12 runs.

Meanwhile, Rohit Sharma scored a quickfire 52 and declared at 557 for 5.

The curators dished out a belter of a track. There were crack on it, but not threatening enough for the spinners.

New Zealand openers put up a good fight, adding 118 runs. As a matter of fact, it was the first time an opening stand reached three-figure mark. Both Tom Latham and Martin Guptill a half-century each. At one point, it seemed the visitors would reach India’s mammoth total. Also read: Virat Kohli v2.0 is intimidating, very intimidating

However, Ravichandran Ashwin, Kohli’s go-to man, broke the shackles and dismissed the in-form Latham. The southpaw scored his third half-century of this series, failing to convert it into a three-figure mark.

Then began the Ashwin vs Kane Williamson contest. Before this innings, Ashwin had got the better of him thrice. And it only 6 balls for the Indian spinner to dismiss the New Zealand captain. He perished the same way he did in the series opener. Ashwin tossed it up well outside off, into the rough and ferociously jabbed in. By the time Williamson could read the ball, he dragged it onto his stumps.

With the quick fall of wickets, India were back in the driver’s seat. It seemed as if a wicket would fall every ball. The ooohs and the aaaahs were back. New Zealand were under fire. Also read: Thank you, BCCI, for Test cricket in Indore

Then began the downfall. Ross Taylor, Martin Guptill and Luke Ronchi were dismissed in quick succession, with New Zealand stuttering at 148 for 5.

All the same, Ashwin bagged his 20th five-wicket haul in only his 39th match. He is now placed fourth in the list of most five-wicket hauls for India in the longest format.

India, however, did not enforce follow-on and batted for 9 overs instead. In other news, Gambhir’s shoulder injury flared up when he came to bat. After a medical treatment, he decided to retired hurt. 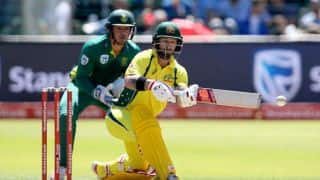 South Africa vs Australia, 4th ODI: 230-250 would have been enough, says Matthew Wade 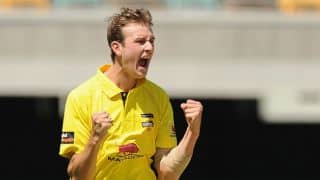