Gambhir began quite well in his comeback match and opened his account with a boundary.

India s one of the best opening batsman, Gautam Gambhir has made headlines through his stunning comeback to the national side. Gambhir last played for India two years back in August 2014 against England at London. Also, he last played for India in Tests at home in December 2012 at Nagpur and that was too against England. Since then, he went through his poor form but with toiled hard to get back into the Indian side. Gambhir was expected to be selected in the ongoing Test series between India and New Zealand but he wasn t. Fortune changed for Gambhir and it did not take much as after KL Rahul got injured during the first Test, Gambhir was included in the squad.

With Gambhir coming back into the side, his selection in playing XI was very much expected for the second Test but once again he wasn t as captain Virat Kohli preferred Shikhar Dhawan over him. After that, fortune once again favoured Gambhir as this time, Dhawan got injured and now his place was almost confirmed in the playing XI for the third Test. Although, Karun Nair was included in the side in place of Dhawan but Gambhir was very much likely to play in the XI and the same happened.

After winning the toss, Kohli revealed his team for the third Test and Gambhir was found to be part of it, which is played at Holkar Stadium, Indore. Gambhir began quite well in his comeback match and opened his account with a boundary and later followed by two back to back sixes toMatt Henry.

He was looking quite confident with his batting but got out after scoring 29 which included two sixes as well. His comeback was very much applauded by the fans on social media which brought him on top trend. With Gambhir getting a warm welcome from fans on social media on his comeback, we present some of the tweets.

Brilliant catch from Tom Latham. The @BLACKCAPS need to get Gautam Gambhir who is arguably India’s best player of spin. #NZvsIND

The only person worried about gautam gambhir’s batting now, is virat kohli.

After successfully managing to get a place in test side, Gautam Gambhir is trying to impress selectors for T20 team.

Just saw that Gautam Gambhir got out scoring 29.It’s a mixed feeling.Good to see him playing but not so happy bcz he got out quickly #INDvNZ

I wanted to see Gautam Gambhir and Virat Kohli batting together! #INDvNZ

All the Very best “Gautam Gambhir” Hit some more Sixes on those haters / Selectors Face..! 😉 #GautamGambhirIsBackAgain

India has already won this series by 2-0 and are currently no.1 Test team in ICC rankings. 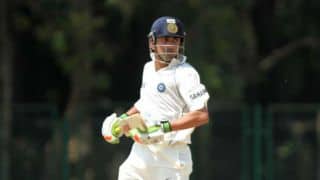