India go into lunch at 358 for 3 on Day 2 of the 3rd Test against New Zealand at Indore's Holkar Stadium.

Five balls into Day Two and Ajinkya Rahane plays a staggering cover-drive. A warm Sunday morning, and the crowd at Indore’s Holkar Stadium was on its feet to cheer Rahane’s class. Meanwhile, New Zealand tried to feed on Rahane’s weakness of playing short-pitched delivery. He, as a matter of fact, was rattled on Day One, top-edging a few. He was lucky to have survived the counterattack, though. However, that did not stop him from scoring runs. He is a boundary hitter by reputation. If the ball comes onto the bat well, he is a delight to watch. He stuck to his strength. Live cricket scorecard: India vs New Zealand, 3rd Test

Despite leaving the short balls, he pulled them in the gaps. While few were eased over the fielders, the chest-high deliveries were banged into the ground. He simply wanted to churn out runs. And that compelled New Zealanders to take off forward short-leg and leg-slip. The fielders were pushed to the boundary line instead, for India were on a rampage. Virat Kohli then joined the party, and executed a lovely square-cut. He perfectly balanced himself and got right on top of the ball. India’s intention was clear: play with utmost freedom. A score of over 500 was on their mind, and they were in no non-sense mood.

Amidst all this, India captain walked down the track and played a delightful drive down the ground. Meanwhile, Ajinkya Rahane was in his 90s. Before this, he fell prey to nervous 90s twice: 96 against South Africa and 98 vs Bangladesh.

The only batsman to have scored hundred this series is Kohli. However, Rahane was on the verge of becoming the second one.

Short balls were being hurled one after the other. Rahane, this time, decided to leave them alone. Third-man was pushed back. Rahane was forced to play an upper-cut. He, nonetheless, inhibited himself from doing so. A hundred was at stake, to be honest. He dealt in ones and twos instead.

He eventually reached his hundred, glancing one behind the wickets. He acknowledged the crowd by lifting his arms in the air. Kohli, like a gentleman, went to the centurion and gave him a hug. Both knew the importance of the partnership. Also read: Twitter reacts to Rahane’s 8th hundred

This is the first time a duo stitched up a 200-plus partnership. The last time we saw a double-century partnership was between Ravichandran Ashwin and Wriddhiman Saha, in West Indies. However, the last time an Indian pair added 200-plus partnership at home was back in 2013, against West Indies (says a lot about their bowling attack). It was Ashwin yet again the thick of things. He added 280 with the then debutant Rohit Sharma.

Truth be told, we don’t see long and tiring partnerships these days. And when we do, it takes us down memory lane and reminds us of Sachin Tendulkar-Rahul Dravid and VVS Laxman-Dravid partnerships.

To add to the fire, the duo had added 262 runs for the fourth wicket against Australia in their own den. It was fourth-highest fourth-wicket partnership for India, with Laxman and Tendulkar topping the chart with 353-run stand against Australia.

Curators dished out a two-paced wicket. As a result, scoring runs was not an easy task on this track. The batsmen had to wait for the ball to come onto the bat. Sometimes it gripped the track and sometimes it flew off it. Kohli, especially, played his shots to perfection. With his natural trigger movement, he made sure he placed himself behind the ball and hit it through the line. Also read: Jharkhand ease to victory against Maharashtra

New Zealand bowling unit, on the other hand, tried their best to outfox the hosts. Disciplined bowling, deceitful tactics, players around the batsman: absolute nothing paid off for them. However, credit goes to Kohli and Rahane as well. They did struggle at the start but made sure they put a price on their wickets.

Rahane then took the charge. He danced down the track and smacked one over long-off, his second of the innings.

Earlier, Gautam Gambhir grabbed headlines with his 29 on Day One. Replacing the injured Shikhar Dhawan, Gambhir’s knock early morning laid a solid foundation for the middle-order. He innings studded with 3 fours and 2 sixes, before playing the wrong line and joined Murali Vijay in the pavilion. Also read: Captain Kohli’s home coming

Cheteshwar Pujara, on the other hand, continued his good form, scoring 31. However, just when we thought he looked good to reach the three-figure mark, he was knocked over by Mitchell Santner. It was a regulation delivery by the left-armer: angled in and sharply spun away from Pujara, dismantling his defence. 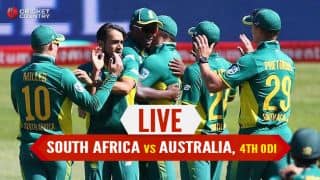