India are in commanding position with New Zealand needing more 437-runs to win with only nine wickets in hand at Tea on Day 4.

Not even once have New Zealand scored 300 runs this series. The maximum they could score was 299, which came in the first innings of the ongoing Test at Holkar Stadium in Indore, thanks to James Neesham’s fighting 71. All the same, India have set up a target of 475 runs with one and a half day’s play to go. To make matters worse, they face a 3-0 whitewash. They have the likes of Martin Guptill, the one double-centurion in ODIs for Kiwis; Ross Taylor, the most experienced in the current lot; the in-form Tom Latham, Kane Williamson and Luke Ronchi. Live cricket scorecard: India vs New Zealand, 3rd Test

To put things into perspective, chasing changes the normal dynamics. And to face the might of Indian spinners in their own den, the task gets even mightier. New Zealand have already lost the series, and they have nothing to lose, if truth be told. More than ever, they now need to switch on their attacking brand of cricket: look to chase the mammoth target. Nonetheless, given the way modern-cricket cricket approach the longest format, it won’t be a surprise if they chase it down. Yes, they do have mountain to climb. Yes, they have to fight their demons to achieve so. It, however, isn’t difficult for a team that is well know for punching above their weight.

Amidst all the hype to make history, New Zealand lost Latham on 6. He has been New Zealand’s finest this series with scores of 58, 2, 1, 74.

Kiwis’ in-form man was already sent to the pavilion.

India captain Virat Kohli attacked with pace right away. Gone are the days when India opened bowling with Ravichandran Ashwin in Tests? Only the talismanic Kohli can answer that.

Umesh Yadav came over the wicket and angled the ball in. It seamed in late, catching Latham in front. It was no-brainer for the umpire. It was plumb. All the same, India seemed to have come with a plan. Latham was dismissed in a similar way earlier this series. It was Mohammad Shami then who jabbed the ball in. Also read: Ajinkya Rahane and the art of slip catching

Be that as it may, Kohli took time to introduce spinners, something that he has been following for a while. The ball is new, no doubt. It helps the pacers, no doubt. But there’s a rough patch on the track. There are cracks on it. And the new ball produces more zip for the spinners. India have remarkable spin pair of Ravichandran Ashwin and Ravindra Jadeja at their disposal.

Kohli’s decisions often take us aback. This series has been no different.

In the first innings, Kohli delayed declaration, waiting for Rohit Sharma to reach his half-century. But the question is: if he did not want to enforce follow-on, why did he extend the first innings?

So far, things have gone India’s way. Hence, it would be unfair to judge Kohli’s decision-making.

Earlier, India posted 557 for 6 (declared) with the help of Virat Kohli and Ajinkya Rahane’s 365-run partnership for the fourth wicket, surpassing the 353-run stand between Sachin Tendulkar and VVS Laxman. While Kohli scored his second double-ton, Rahane scored a brilliant 188. Also read: Homecoming of Neesham

Meanwhile, it was Ashwin who caught the New Zealanders in maze with his six-wicket haul, bundling them out for 299. 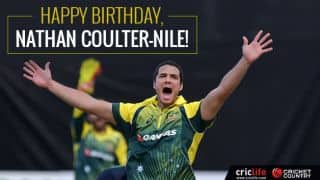